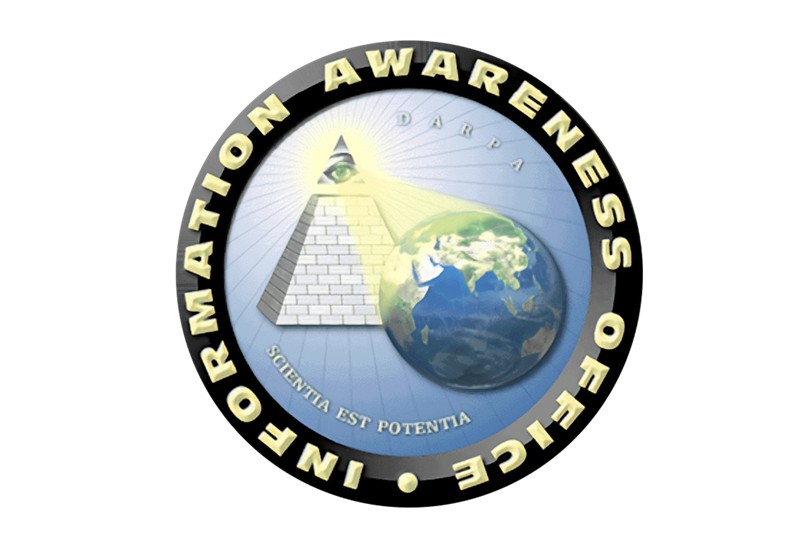 So far, the biggest revelation of the NSA spying story is…that anyone actually thinks this story is a big revelation.

A look back to 2006 reveals a story in the USA Today that sounds a lot like the whistle blown by Edward Snowden. In fact, the massive, technologically-driven surveillance state got its biggest push over a decade ago under the inauspicious midwifery of Iran-Contra superstar Vice Admiral John Poindexter.

After 9/11 changed everything—including the Constitution—Poindexter slid into a cozy chair at the laboratory of shadow democracy called DARPA (Defense Advanced Research Projects Agency) and quickly started experimenting with the market opportunity created by the PATRIOT Act. His work gave birth to the Total Information Awareness program.

The TIA was exactly what it sounded like—an omnipresent database containing as much information as it could possibly collect. In addition to gathering and storing all emails, text messages, credit card activity, traffic tickets, court records, social network traffic and medical records, it also included a biometric gizmo called “HumanID” that could analyze facial features, body movements, gait and other biological traits and determine the identity of a distant human target.

That was just one of many dystopian daydreams being pursued by Poindexter and his Military-Industrial contractor buddies at Hicks & Associates—a Northern Virginia “consulting firm” populated with defense insiders. Hicks & Associates was also a wholly-owned adjunct of big-time government contractor SAIC (Science Applications International Corporation).

However, the unbearable “totalness” of Poindexter’s Frankendata program did not sit well with members of Congress. Just a couple years after 9/11, Congress actually voted to defund the TIA.

But mere democracy could not stop it.

As Shane Harris of the National Journal reported in 2006, the TIA “lived on” like a B-movie monster. After Congress officially pulled the plug, key components of the TIA program were simply parceled out to other agencies. Cloaked in code-worded black budget secrecy, the money kept flowing into programs like Topsail (a cute re-naming of the TIA’s Genoa II program) and into the main TIA program, which was re-named “Basketball.”

Both Topsail and Basketball were quickly passed on to a little-known agency called ARDA (Advanced Research and Development Activity), which took control of the “research” and reengaged SAIC in a remunerative “public-private partnership” to further develop a program that (it’s worth noting again) had been officially ended by an act of Congress.

They just couldn’t keep up with an “intelligence community” they’d helped to unleash over the course of two dark days in October of 2001 when they passed the ironically and perhaps tragically-named PATRIOT Act.

With the Fourth Amendment irrevocably exiled to the Island of Quaint Notions—along with the Geneva Conventions—there was little they could do to stop the national security behemoth standing astride both sides of the Potomac River.

Even if they’d wanted to pursue TIA (aka Basketball) as it moved from DARPA to ARDA, intelligence busybodies made a renewed effort to obscure an agency that, according to an AP story, wasn’t even “listed in the U.S. Government Manual, the 684-page official compilation of federal departments, agencies and offices.”

So, in the interest of not-quite-full disclosure, ARDA’s website was taken down in 2005 and the agency rechristened the DTO (Disruptive Technology Office). Like its predecessors, the DTO was located at Fort Meade, Maryland on the site of…wait for it…the NSA.

Despite the shell games, speculation persisted that the TIA-Basketball-ARDA programs continued under the auspices of the DTO. So, in 2007 the DTO was folded into yet another acronymic agency—IARPA (Intelligence Advanced Research Projects Activity).

When IARPA was founded, the former head of the DTO—Dr. Michael Macedonia—left to join the newly-created “National Security Division” of Forterra Systems, the self-described “market and technology leader in private virtual worlds.”

Isn’t that a happy coincidence?

And Forterra’s “private virtual worlds” are built on its OLIVE (On-Line Interactive Virtual Environment) technology, which, not coincidentally, was purchased in 2010 by…wait for it…SAIC!

Also not coincidentally, OLIVE is now the foundation of SAIC’s “Virtual Government” techno-product—“vGov.” According to a Tech News Daily blurb in 2010, vGov is a “virtual world that will function much like a secure ‘Second Life’ for government agencies.”

SAIC developed vGov in concert with the USDA, Department of Homeland Security, Air Force and National Defense University, and they anticipate a plethora of national security applications.

So, SAIC participated in the genesis of the TIA through its Hicks & Associates consultancy. It popped up throughout the shell games leading up to the folding of the DTO into IARPA. And it followed up on Dr. Macedonia’s shift over to Forterra by buying it up so they could get into the business of selling “Virtual Government” back to the US taxpayer.

They’ve already scored a profitable-sounding “indefinite delivery/indefinite quantity” contract to provide “Virtual Government” to the USDA—and there is little doubt that vGov is being sold back to the intelligence community. Unfortunately, you probably need an avatar with a security clearance to find out exactly what is going on inside the “Virtual Government.”

And this really is the point of the NSA spying story—how the merger of corporations with government agencies has turned the US government into an actual “virtual government” populated with public-private avatars operating in a Second Life-style world all their own.

Insiders like John Poindexter, Jack Thorpe and Dr. Macedonia pass effortlessly between public and private, capitalizing on the ultimate captive market—the fearful taxpayer. And national security is, and has been since the end of World War II, one of the greatest sales pitches ever devised.

While the American taxpayer is fed a diet of shock and awe and fear and loathing, the people living in the recession-proof world of public-private partnerships work tirelessly to protect their job security under the guise of super-secret national security.

And, therefore, they’ve got a reason to keep sending taxpayers the bill.

'The Frankendata Monster' have 2 comments