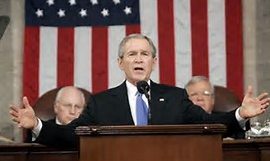 From the Herald Sun:

US President George W. Bush said today that a controversial domestic spying program that some critics say is illegal was necessary in light of new threats on an audiotape from Osama bin Laden.

“I’ll continue to reauthorise this program for so long as our country faces a continuing threat from al-Qaeda and related groups,” Mr Bush said during a visit to the National Security Agency (NSA), which runs the surveillance initiative.
“Listen to the words of Osama bin Laden and take him seriously. When he says he’s going to hurt the American people again, or try to, he means it,” he said.

Wow…isn’t it great of Osama to come through with the tape just as the Administration impliments it’s plan to spin the illegal NSA spying mess into a “Terrorist Surveillance Program” and, as Karl said, a drive to victory in the 2006 elections. Osama…”Oops, You did it again!”

'Bush, Osama and a bit more on timing' has no comments