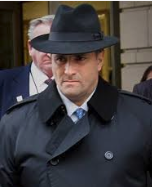 I would like to announce that I am returning money from Jack Abramoff. Unfortunately, I cannot. I’m here and working, but I’m outta the loop on this one.

Or maybe I should start a support group for those legislators who didn’t get money from Abramoff…a sorta lonely hearts club for congressional ne’er do wells.

The Abramoff Lobbying Mafia will dwarf the combined corruption of the Teapot dome, ABSCAM and the Capitol Post Office scandals. Today we heard it could involve up to 60 legislators and staffers. One White House official is indicted. Karl Rove and Tom Delay pop up more than those annoying plastic gophers at a kiddie arcade. We are collectively traveling into the Heart of Darkness. We are seeing exactly why this town is The Whore of Babylon.

Whores offer services for money. And that’s what this town is all about. Legalized bribery abounds, and it’s hard to take seriously the shock of Sen. Conrad Burns, among others, at the revelation that Abramoff and his team of former Delay staffers duped him into a massive bribery scandal. Campaign contributions of any size come sealed with the wax of implied reciprocation. Junkets and PACs and non-profit front groups process payment for services rendered.

Yes, I know…it’s always been that way. Sure. But not like this. Not this thoroughgoing, pernicious and with the intention of gaming the system to enrich a bevy of political functionaries. And no, this is not different from the Enron scandal, what the big pharma companies get out of the close ties between the Bushies and Eli Lilly or the other, massive scandal that still hasn’t fully aroused the media–Halliburton.

You see, good ol’ Reagan Revolutionaries–Abramoff worked for Reagan’s campaigns–talk about cutting taxes, but they realize that taxpayer dollars are a golden stream that will never stop flowing. Particularly during a national security build-up. Money flows when there is a enemy to bloat up through gamed intelligence, managed perceptions and dire warnings from the Bully-shit Pulpit. Abramoff came of age during Reagan’s war on Central America. He worked to place stories and gin-up support for the Contras. Yes, that’s right…he was part of Iran-Contra.

Jesus Christ, people…do you realize how many of the current power whores feeding off of 9-11 were part of Iran-Contra? And don’t get me started about Michael Ledeen (an apologist for Fascist Italy, evidence indicated that he probably placed the false Niger-Uranium document in Italy)!

Anyway…back to the Whore of Babylon….

Although this mess rightly inspires outrage and there is some hope that a few heads will tumble down the Capitol steps…let’s be honest. We’ve had all the evidence we’ve needed to conclude that this democracy is a sham, that we’re in the midst of a corporate-fascist oligarchy and that our government truly is a whore bought out by the highest bidder. Government power in the form of military might is whored out to protect and abscond resources–see Operation Iraqi Liberation, to lease off at cut-rate prices our nation’s dwindling resources, to fund the military-industrial complex that does the dirty work of protecting globalization’s investments, to control the public debate and media…to suck up tax dollars from the working and middle classes and dole them out to the oligarchs. Abramoff is merely one, high-falutin’ pimp who got caught driving his purple Cadillac between K Street and Pennsylvania avenue.

The really big pimps…those who make money off of war and military hardware, will happily see Abramoff sacrificed on the altar of collective justice to appease the gods of an American ideal that no longer exists. This pimp will be off the streets, and many will say justice is done and it’s time for reform. But the Whore will keep on spreading her tax-funded legs to those who come calling. I fear that Jack will be the next Martha. Yes, there is no comparison in terms of scale…Martha was truly a little fish…but the effect could be the same. Nail Jack and keep the damage down to a minimum.

You can see it already in the lack of attention being paid to Delay’s fingerprints. Or Jack’s ties to Rove and Interior Secretary Gale Norton…barely being discussed.

There may be a backlash in the upcoming election…but corporate cronies at Diebold have enough paperless voting machines in place to keep me paranoid about the outcome of an outrage-fueled voter revolt. I don’t see the post-Watergate dynamic being allowed to repeat itself.

What’s really sticking in my craw is that Abramoff had former Mossad assassin on retainer, funded a Israeli sniper school in the West Bank and was part of a Mafia hit on a business partner who got in the way of is SunCruz deal. He was part of Iran-Contra, so that “style” of politics was very familiar to him. And it’s the style of politics we’ve had since JFK was gunned down. Please look a little harder at the dynamic. The government is a front for racketeering on so many levels, in so many ways. And we are, like those Indian Tribes Jack marked, in a perpetual shakedown.

'Feeling a bit left out' has no comments