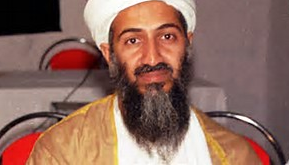 Osama is there when we need him. Okay, when Team Bush needs him

On the eve of the 2004 election, polls showing a race too close to call, and he was there to remind the American people that the face of evil is still out there, sending us some cryptic political analysis and reacquainting us with the type of fear that makes W acceptable to half of America.

What great timing that was.

And now, after a botched attack in Pakistan, a growing domestic spying scandal that includes monitoring Quakers, checking your internet searches, tapping your phone calls and generally keeping tabs on as much as they can…comes Osama to the rescue.

With Abramoff looming over the GOP for the upcoming 2006 Congressional election and the Congress ready to start hearings on the NSA, Rove announces that the GOP will win with a strategy of national security. On the post-9-11 mentality. On fear.

So, Osama’s bizarre message–bereft of expected Islamic hues and calls to Allah, but rather filled with odd request for a truce, the rebuilding of Afghanistan and Iraq and an Oprah-like book club recommendation–comes just as the White House and Rove make there push to frame the debate. Rove makes his big speech about the fear-security campaign strategy. Cheney, Bush and Gonzales start selling illegal wiretapping as a terrorist monitoring program. Dan Bartlett says Osama can still plot attacks…and the White House continues to benefit from the occasional appearance of Osama in our news cycle.

Now, that’s if you believe Osama keeps on churning out recordings. Although the CIA “verified” it, no major news organization has checked it out for themselves, asked about the methodology used to verify the tape or even turned those experts who question the authenticity of the tape. Well, ABC did consult one expert at Duke University who thought it was a fake, But it was one web article. It did not make it into the news cycle.

Many of Osama’s previous tapes have been called into question. At least, top analysts in Europe have done so. Not here, of course.

Think about how useful an alive and kicking Osama is to the Administration. We never caught him…and we have sworn depositions from Air Force personnel that they evacuated nearly 100 Taliban and Al Qaeda “leaders” from the battle of Tora Bora…flying them on C-130s to Pakistan. They were pissed.

But the lawsuit for which they gave those depositions was frozen by John Ashcroft because of national security.

Osama may be dead. But it doesn’t matter. Our government is paying hundreds of millions of dollars to place propaganda around the world. Look up the Lincoln Group, among others. That’s what they do. And John Rendon of the Rendon Group talks openly about placing news articles in foreign sources so they will cycle into the US press and, therefore, sell the idea of war to the American people He did so in the lead up to the first Gulf War. And has done so ever since.

Osama and others seem to be alive, using websites and making tapes. They “leak” them, I guess, to Al Jazeera and we cannot seem to trace them back to the source. Can’t we at least take out the websites? Knock out the servers? I guess not.

So, Osama keeps on coming through, on time and with a Jason-like resilience. And the fear that has blinded so many of us may just blind enough of us to keep all the amazing scandals that spin like a hundred tops around the White House and the GOP from hitting them in 2006. They all may topple first, as Osama and Rove spin their own magic. Right on cue.

'Osama says, “Timing is everything”' has no comments