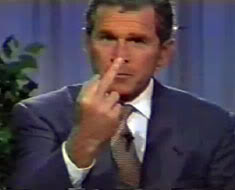 Today, in an exclusive interview with high-gloss newsreader Elizabeth Vargas, President Gas told her and America that he hopes history jugdes his Presidency as one of “peace.”

But let me tell you…the Bushes are basically untouchable when it comes to the media. Yeah, I know there has been bad news. However, it is dwarfed by what doesn’t get reported in the mainstream media. Volumes on shady dealings, Nazi fundings, CIA connections, Bay of Pigs evidence, cocaine use, drunk driving, money from Reverend Moon…and on and on.

I worked at the most respected hour of news in TV back when W got the nomination in 2000. I prepared a briefing book for an interview. The previous week Gore got hammered in his interview. I watched Mr Respectability toss one softball after another to W. Nothing on pollution in Texas. On the failure of his education reform. On his shady time in the National Guard. And on and on. Nothing. I watched the “newsman” orally copulate W via satellite while my briefing book was ignored.

I made some comments in the newsroom. I never got a recommendation when I left.

Consider this. Ron and Nancy Reagan are the royal family of Republicanism…the demigods of the GOP. But Kitty Kelley can write a book pointing out that they used a psychics to make decisions. Ouch! Kitty was all over Larry King, the talk shows, the morning news shows…everywhere. It was true, Nancy admitted.

Now…how many of you know about Kitty’s book on the Bushes? “The Family” is an assiduously researched, legally combed over tome that shows the true darkness of the Bush clan. It’s a troubling look at the most powerful family in America. And they have been since the end of World War II. Kitty shows it. And how awful a human being Barbara is…how cunning and up-to-his ears in covert fun and games Poppy is…how totally craven the family has been during their long ride on the oil-military money train.

Larry King cancelled her appearance and refused to bring her on. The night before going on the Today Show, they cancelled. No one would touch her. Nothing.

You can piss on the Reagans all you want…but don’t touch the Bushes.

There is this great video out there….of W…before he became Prezzie…on a satellite feed waiting for an interview. I’ve seen the video a couple times. Not on the news, of course.

Because he does this:

Now, what would all those “President Bush has a good heart” Christians who march lockstep behind their Jesus-lovin’ leader have thought had they seen it before the 2000 election? And what if there was video of Gore doing that? Or anyone else, for that matter?

Yup…non-stop replay. Like the Howard Dean scream. W gets a pass, though.

The truth is out there…but it’s not “out there” in broad daylight.

Bush says his presidency is all about peace while Iraq is churning out the casualties…and Vargas was so well-vetted for that “interview” that she didn’t even need Astroglide.

'The Peacemaker and the Media' has no comments