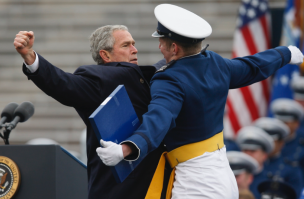 Okay, I was wrong. No worries…not the first time, not the last. But I thought Team Bush would pull out all the stops to keep the Dems from taking over Congress and using subpoena power to investigate every sordid nook, each scummy cranny that we’ve see in the darkened face of the Imperial Presidency.

I predicted an October Surprise.

The sudden end of President Carter’s deal with the Iranians to release the hostages back in 1980, which would’ve given Carter the late push he needed to beat Reagan…and mutated over ensuing years into Iran-Contra.

This Administration’s ever-so-good fortune in having Osama make a last minute appearance before the 2004 election.

Or the 2000 October Surprise which wasn’t felt until November…the pre-emptive purging of over 50,000 voters from Florida’s voter rolls…people who, quite coincidentally, were mostly Black and Democrats and would’ve voted for Al Gore. People who were convicted of crimes in years like 2008, 2010. A purge lorded over by Katherine Harris.

This time? I was certain we’d see Osama’s dead body. Or a major plot uncovered. And if all else failed? Diebold would deliver.

But I was wrong. Why? Because something has changed since Katrina, the brutal storm that blew open America’s eyes. Then came all those terror plots kept coming out just as revelations of Republican malfeasance spun into the news cycle. And Lou Dobbs went on a one-man crusade to scream and shout about electronic voting machines. And then there were scandals…scandals that the scandalizers assumed would fall into the infamous American memory hole and leave the perps unscathed. In the end, it was all too much. Too much Abramoff and earmarks, too much Halliburton and torture, too much talk of a fading Constitution and the end of ethics, too much Iraq and to many polls showing that America was seen around the world as despised and dangerous.

There are many other factors, including a growing feeling (over one-third, according to one poll) that 9-11 stinks…the official story stinks. People may not know why or what, but many can no longer ignore the smell.

But the key to understanding the cyncism that undid the Mayberry Machiavellis, those cynical users of power and propaganda? Look no further than gas prices. Yeah, gas prices. Remember how high they were? Coupled, of course, with stories of record profits for oil companies. Add a jigger of Texas Oil Mafia crude (or is it the crude Texas Oil Mafia?) and people knew. They knew they were getting screwed. Then September came, the campaign got hotter and the prices dropped. This time the story was too blatant to ignore. The mainstream media and mainstreet America didn’t hesitate to think it was a fix. That the Oil Boys in the White House had tacitly, implicitly or explicitly made it so…so it would ease American anxiety before they went to the polls. Gas got cheaper as the stakes got higher and nearly no one flinched at the idea that there was…gasp…a conspiracy to affect the outcome of the election.

Bring up electronic voting machines and you’ll get, for the most part, the same reaction. As a people, we’ve become acclimated to the idea that there are no coincidences. And why not? We’ve endured six years of a presidency that leaves nothing to chance. Mission Accomplished pasted onto the photo op, then it is airbrushed out. Bush goes to Iraq for Thanksgiving as poses with a plastic “stunt turkey” in a Baghdad mess hall. Terror plots that aren’t really plots at all. No bid contracts. Stage managed rallies with hand-picked audiences. Staged evidence to get into Iraq, complete with vials of supposed anthrax and child-like drawings of mobile weapons labs…none of which were based in reality or fact.

So, for people who’ve been so relentlessly propagandized, so consistently cajoled and manipulated…many headed into this election expecting “something.” Like I was expecting “something.” But the tipping point may have come last night…when all that chatter about Diebold and terror scares, all that media jabbering about a shoo-in Democrat victory…it all made it nearly impossible for our Perp-in-Chief and his Roving propagandist to play three card monty with the election. They couldn’t steal this election. They couldn’t do much of anything but let the election actually happen. The ether was too thick with cynicism, too full of skepticism…too gorged of a diet of misdirection.

Live by the sword, die by the sword…ain’t that the way that saying goes? They’ve had six years of unfettered swordsmanship. Last night, they finally fell on it. And the crackpot crazies of conspiracy-land are no longer yelping on the fringe. Not anymore. There has been to much conspiring…or, as exit polls called it, too much corruption. Because, my fellow fringers, what is corruption without a conspiracy to make it work?

Last night? Last night we saw the corruption exposed and rejected. I was wrong…Americans didn’t get played one more time. Christ, I love being wrong.

'Suprise? No October Surprise!' has no comments