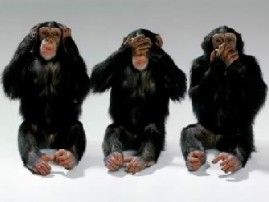 Every year Project Censored compiles a list stories that are, despite their obvious importance, ignored by our mainstream media, our newspapers of record and our nation’s sycophantic horde of so-called journalists.

This year’s top 25 list is out in the public sphere and, in keeping with a decades-long theme, it will be treated like a leper by the amnesia-afflicted hurdy-gurdy monkeys who populate inceasingly flaccid newsrooms across America.

These monkeys are…wait…no…they are not monkeys.

They tucked their tails so long ago that evolution has selected out this now unnecessary trait. And they are trained. At top Journalism Schools. Well trained, in fact. They are well trained NewsChimps.

These NewsChimps come in three varieties:

Hear No, See No, and Speak No.

But Project Censored soldiers on and goes where no NewsChimp has gone before.

Into a strange land of inquiry and awareness so bizarre…so alien…that overwhelmed NewsChimps scurry in the opposite direction, seeking corporate bananas to feed on and, thusly, soothing their suddenly upset stomachs.

Here are some of my favorite stories our NewsChimps ignored on this year’s list:

#2 Halliburton Charged with Selling Nuclear Technologies to Iran:
See below…

#6 Federal Whistleblower Protection in Jeopardy:
Too many whistles blowing could confuse and frieghten our NewsChimps. As they quickly scatter, running wildly in different directions, they might inadvertently stumble onto some truth. We can’t have that, can we?

#10 Expanded Air War in Iraq Kills More Civilians:
Our NewsChimps have completely avoided the massive civilian death toll in Iraq. The British medical journal Lancet estimates it to be around 650,000 people.

Their methodology is quite sound. But not reported on.

Oh yes, our NewsChimps mentioned it….but they never investigated it or checked out the veracity of the science. No, they aped the Administration’s disclaimer about wild estimates of civilian causalities and ignored the fact that our government ordered Iraqi doctors to stop counting civilian casualties once we controled Baghdad.

#11 Dangers of Genetically Modified Food Confirmed:
Monsanto has a pesticide built into corn. Into the genetic structure of the corn. There are serious cross-pollination issues. Corporations are designing crops with “terminator genes” that keep poor farmers from harvesting seeds to grow more cops. Yum Yum! Could someone get our NewsChimps some genetically modified bananas to chew on?

#13 New Evidence Establishes Dangers of Roundup:
But gee, don’t the Joneses have a nice looking yard? Better buy another gallon so we can keep up.

My personal fav:
#14 Homeland Security Contracts KBR to Build Detention Centers in the US:
Just look for yourself, this is scary stuff. KBR, by the way, built Camp X-Ray at Gitmo…so at least we know they are the right company for the job. Who those camps are intended for is an interesting question, right?

#24 Cheney’s Halliburton Stock Rose Over 3000 Percent Last Year:
The full and yet untold story is that Cheney drove down the price of the stock while he was CEO of Halliburton. In fact, he acquired a company with a huge asbestos liability during his tenure. That move was widely criticized in the business press and by Wall Street analysts…and it caused a major downward spiral of Halliburton’s stock. Right before the presidential campaign of 2000, Cheney’s Halliburton was on the verge of bankruptcy (according to Business Week and others). The stock fell below $10.

Now…if you knew that Cheney was going to be in the Veep’s office, running the behind the scenes program to maneuver us into a war with Iraq and that his office, as it has now been proven, would be coordinating contracts to his “former” company…you might want to buy up the suddenly cheap stock and sit on it for, say, 6-8 years. You would make quite a bit of money. An obscene amount of money. And your taxes on those profits would go down precipitously because the GOP was planning to approve the President’s proposed tax cut on capital gains. A huge tax cut.

Also, doesn’t Censored Story #2–Halliburton Charged with Selling Nuclear Technologies to Iran–make you wonder if they were helping to build up yet another threat that, should we need to take pre-emptive action, would lead to even more Halliburton profits?

Halliburton, by the way, also made millions off of the Iraq Oil for Food Program. But you didn’t hear much about that either.

Once again go to the full list for the details. You’ll have to do it yourself because our NewsChimps are too busy feeding themselves from corporate trees to report these stories.

Thanks again, Project Censored. Every year you expose our NewsChimps for what they are…the gatekeepers of our Banana Republic.

'Project Censored Exposes Our Banana Republic' has no comments