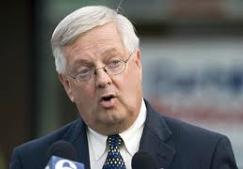 Yes, it was part of a larger rebuke of the GOP in the mid-term elections, but Weldon’s story is a bit more nuanced. A popular Congressman known for bringing home crispy bacon, Weldon’s re-election campaign got burned in the final weeks leading up to the election.

The FBI announced that they were investigating his daughter for using her political connectivity to make some money. Gasp! That never happens, does it? And when it does…like, say, in the instance of Tom Delay…it requires immediate and thorough investigation.

While Delay’s crimes are massive, even involving a de facto labor camp in the Marianas Islands, those transgressions are not worthy of a thorough investigation.

But Weldon…now he really went overboard. He exposed Able Dangerand, in so doing, raised questions about the Pentagon’s and FBI’s foreknowledge of the 9-11 hijackers.

Although Weldon was, for the most part, motivated by a political desire to push some of the blame onto the back of Bill Clinton…he asked a trenchant question: What did the government know and when did the government know it? What he found was that the Defense Intelligence Agency and Pentagon had been tracking Mohammed Atta for at least a year prior to 9-11. That the program, called Able Danger, had a chart of names and interconnected relationships that foreshadowed the 9-11 attacks.

Weldon became a thorn in the Pentagon’s side. And those charted relationships…a chart that a Pentagon whistleblower told Weldon and a congressional panel about and was initially said to have been destroyed…sounded exactly like the chart FBI terrorism expert John O’Neill made after investigation the USS Cole bombing. You know, important stuff like the players, who they knew and what they were up to.

Embarrassing stuff to the Pentagon and the FBI respectively.

Particularly since the FBI had agents living next door to two hijackers in San Diego, and by two more in the D.C. suburbs and….thanks to Weldon…we know the Pentagon was tracking Atta.

Lotsa foreknowledge in there.

But the FBI made certain that his continued tenacity would be rewarded…with an investigation. And it was announced at a crucial time. Weldon lost.

But so did John O’Neill. He was railroaded by the FBI for a briefcase bungle. He, apparently, had some papers he was working with in his briefcase and exposed those papers to possible theft. He was compromising national security, or some such bullshit.

Fighting for his career and to expose the terror network he predicted would attack the World Trade Center; he was offered a job as head of security for the WTC. A highly paid job that, coincidentally, was offered by a company called Stratasec. Stratasec also did the security at Dulles Airport and for United Airlines. Marvin Bush, coincidentally, sat on Stratasec’s Board of Directors.

John O’Neill took the Stratasec job. John knew the attack was coming and thought he could do something to stop it. John O’Neill’s body was found in the rubble of 9-11.

So Weldon did okay…lost his job, but not his life.

Like Timothy McVeigh did…executed before the full story of the Oklahoma City bombing could be told.

McVeigh said as much to Gore Vidal in a series of letters. We still have nothing on John Doe #2. Even though an enterprising reporter named Jayna Davis in OKC found and identified him. Even though a police officer responding to the Murrah Bldg bombing claimed to have seen someone not fitting the description of McVeigh.

Some in the building talked about a missile and other explosives being brought into the Murrah Building before the attack. Yeah, years later the US Customs Service admitted that they did bring in a TOW Anti-tank missile, but they it not have a warhead in it.

And there is the story of Officer Yeakey, who responded immediately to the bombing. He saw FBI and ATF agents running around withing minutes of the attack. He saw quite a bit and kept on digging. He is now dead.

McVeigh’s involvement is clear, but the network that he was part of remains a mystery. He was living evidence. The evidence was destroyed…much like the Able Danger Chart.

A chart that, coincidentally, may have also predicted the attack on the USS Cole.

The same attack that John O’Neill investigated and, in what is perfect symmetry, led him to create his predictive 9-11 chart.

But the Congress did just say that the FBI blew the investigation of the Oklahoma City bombing. Too bad McVeigh is dead. Yes, there are questions. But, alas, we will never get the answers. It’s okay, we are still busy forgetting all those troubling “foul-ups” of 9-11. We don’t have time to forget the anomalies of the OKC bombing. Like Hussein Al-Husseini, the John Doe that Jayna Davis found and identified. Davis, interestingly enough, was sued by Husseini before he was ever identified…for defamation of character. A pre-emptive strike of sorts.

Al-Hussein was working at Boston Logan Airport on 9-11, by the way.

He came over after the 1991 Gulf War…part of an entire class of high-level Republican Guard and Iraqi secret police who were given safe passage by Poppy Bush. You know…to have that intelligence at hand…just in case. Just like the Nazi scientists and SS officers the CIA brought over in Operation Paperclip after World War II. Men put into key positions in the Military-Industrial Complex and the Pentagon.

Which is ironic because we are about to destroy more evidence. When Saddam is executed the full story of his alliance with the Reagan-Bush team will die with him. The illegal sales of chemical and biological weapons. The intel we gave him to attack Iran and the Kurds and those other unseemly parts of the long-standing relationship that are known will never be filled out in painful detail. Saddam had a WMD…a WMD of information about his patrons in Washington, D.C.

His WMD will be decertified by a simple noose.

But the other Hussein…Mr. Al-Husseini…remains on the loose. It stands to reason that a high-level operative of Saddam’s Iraq would be valuable to US intelligence. But, according the latest investigation, we will never know what we don’t know because the FBI “blew it.”

Yeah, a presidential commendation and big salary bonus went to the FBI guy who personally stopped the investigation of another piece of living evidence…Zacharias Moussaoui…before his computer could be scanned for plot details.

He got no answers. But Grassley didn’t persist. And he wasn’t up for re-election this time.

But Sen. Mark Dayton persisted…on NORAD and the massive contradictions between the various stories they gave…to the press, to the 9-11 Commission and to the Congress.
He kept asking. No answers were given.

He retired before this latest election.

Unlike Weldon, his exit from Congress closed the door on electioneering vendettas.

Now, clearly there is no excuse for nepotism and trafficking in one’s political connections. But the FBI did not hammer former Sen. Frank Murkowski, or the cushy jobs given to the children of Justice Scalia and Justice Rehnquist in 2001, or a dozen other Congressional sycophants who have families who’ve profited from political connectivity.

No, Weldon’s lost his place in the pan. He was dumped into the fire by the FBI. In terms of cooking up cover-ups, this one was well done

'Rep. Weldon Got Cooked, and Other Recent Stories on Terrorism' has no comments