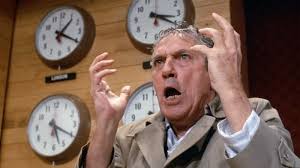 What is news? And why do we just call the whole damn blathering mess “the media”?

Is the message the media itself, as Marshall McLuhan famously said?

God help us if it is…because the media is morass of prurient details, bogus scarefests and misanthropic misdirections. It’s hard to find “news” in between all those Astronauts in Diapers, Amber Alerts and endless political babbling by putrid pundits who claim to actually know something about something. Whatever that may or may not be.

At this moment, CNN is airing wall to wall coverage of Anna Nicole Smith dropping dead.

As one CNN anchor said to another, “It’s tragic…because she did make great television.”

A.J. Hammer, the other anchor, replied, “Yes, it was great television because it was train-wreck television.”

And then Hammer re-regurgitated all the details of her sordid, perhaps even tragic, life to Wolf Blitzer, keeping the coverage going and going and going.

What the hell has happened to the media? Where the hell is the news?

…mounting death and destruction in Iraq and the total collapse of the surge strategy before it even starts…and, by the way, there are tens of thousands of refugees fleeing Iraq, leaving their broken homes and picking up their broken families and fleeing the “liberation.” Has that been on CNN today?

…$8 billion worth of hundred-dollar bills, packaged by the US Treasury and shipped to Iraq after the Great Liberation, is missing…gone…like a cheap magic trick by a cheap kiddie party magician. Viola, taxpayer…now you see it, now you don’t

…Merck is pushing its HPV drug on the entire pre-teen female population of the United States by attempting to make it a mandatory vaccination which, at approximately $300 per shot, is poised to be one of the greatest drug deals of all time.

…the NAFTA Superhighway being built from Texas all the way to Canada which, by the way, is going to be one giant toll road…mostly owned by foreign companies. Huh?

…or the fact we still haven’t caught the anthrax attacker, owe 45% of our national debt to foreign banks and nations…and on and on and on.

No. We get day after day of the Diapered Astronaut. Perhaps NASA can get Depends to sponsor a Space Shuttle, like NASCAR. Now we will get endless hours of Nicole-Anna-SmithTV. We get Amber Alerts aplenty…giving us the impression of rampant child abductions despite FBI statistics that show abductions have fallen every year for over a decade.

We get Lindsay Lohan’s latest drinking binge or rehab visit, but Lara Logan…just as pretty…but far more trenchant…is unable to get CBS to air her reports from Iraq. That’s right, she actually had to organize a media campaign to pressure her own media employer to air the news she was reporting from Iraq on their dime.

Somewhere along the way the news we grew up watching mutated into a freakshow…with national networks covering “breaking” local news like apartment fires, car chases, small-time crime in small town America. Fine fodder for the affiliate in Peoria, but worth hours and hours of national coverage?

No, like Paddy Chayefsky’s foreboding anchor in the movie Network, we should all be “mad as hell.”

One might think we are being conditioned to live in fear, to ogle at the misfortunes of various and sundry people…and, in the timeless process of misdirection, to accept less news so we accept more injustice, more organized corruption.

Many media folks think it’s the viewers who want less. The lowest common denominator is the commoner in front of the TV set, choosing the course obediently followed by their dutiful servants in corporate offices at all the major networks, newsrooms and movie studios

But Rupert Murdoch let the cat out of the bag at the Hyper-Elite Conclave Called Davos.

Asked if his News Corp. managed to shape the agenda on the war in Iraq, Murdoch said: “No, I don’t think so. We tried.” Asked by Rose for further comment, he said: “We basically supported the Bush policy in the Middle East…but we have been very critical of his execution.”

Now, had it been an actual cat, in an actual bag…lit on fire and placed in the lap of a stripper? Hell, it might have made national headlines.

It came and went, like a cool breeze gently and inconspicuously blowing a no-bid Halliburton contract from Cheney’s office to the Pentagon. One would think that a big-time mogul admitting intended manipulation of the news would, at least, make news.

Network’s fictional anchor Howard Beale, after being used, duped and suckered into a corporate-ized newscast said it best:

Like Howard Beale, we’ve been had. Duped. Conditioned to accept more and more of less and less. And it is conditioning by the gatekeepers, the editors and the corporate boarders who decide what we, the people, want and need and can handle. We can’t, according to many of them, handle the truth.

But people aren’t totally stupid. Parents, in a recent poll, said they are more afraid of the media’s influence on their children than of their children having sex. Well, that and the fear their kid might get fat (between endless food commercials and non-stop “skinny is best” messages, what’s a kid to do?).

The always over-hyped commercials during the generously-timed Super Bowl were, this year, filled with “pain and humiliation.” It stood out from the hard helmet on helmet impacts during the game…products pitched with all sorts of petty violence, humorless jabs at humanity and that “whatever/so what” cynicism that dominates sitcoms and newscasts. Widgets sold to those looking for the big laugh at the expense of others and captivating gasping rubberneckers who love a good car crash.

Is that who we are now? Is that the message of our media?

Sometimes it’s easy to despair of it all. On the media side, trying to break news through the semi-permeable barrier of elitism that dominates places like D.C. can eventually break you. Or me. Or both.

D.C. is L.A., but the celebrities have the power of life and death in their hands. And their hands in your pockets.

Those of us in this morass we call the media take solace in lunches, exchanging war stories and decrying the shortsightedness of executives who “fail upwards,” refuse to think that their viewers can think. We spin eulogies over drinks. But many of us give up. Many have and many more will if they start out in their “careers” thinking the media is anything more than a whore for corporate interests.

And those who play pimp? They become media moguls, just ask Rupert.

'Media-ocracy: Aren’t You as Mad as Hell?' has no comments