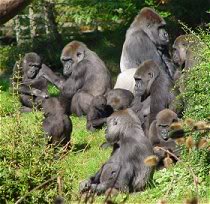 Gential lice are funny, unless you get them. Not that I have…but could you imagine one of these clamped to your dangly bits? Or, ladies, your non-dangly bits?

So when I saw the following headline and story in the NY Times…I was understandably interested. I’m always looking for lice-related comedy material:

In Lice, Clues to Human Origin and Attire

One of the more embarrassing mysteries of human evolution is that people are host to no fewer than three kinds of louse while most species have just one.

Even bleaker for the human reputation, the pubic louse, which gets its dates and residence-swapping opportunities when its hosts are locked in intimate embrace, does not seem to be a true native of the human body. Its closest relative is the gorilla louse. (Don’t even think about it.)

Okay, so we…somewhere along the circuitous road of evolution…picked up pubic lice (I prefer genital lice.”Genital” is another comedy word). Yeah, our ancestors got close enough to pick up crabs.

But that wasn’t the funniest part of this article…

By comparing louse DNA, a team led by David L. Reed of the University of Florida has now reconstructed how this strange situation probably came about. Dr. Reed’s team collected pubic lice from a public health clinic in Salt Lake City. Samples of gorilla lice were obtained by members of the Mountain Gorilla Veterinary Project, which provides free health care to gorillas in the wild.

Excuse me? What was that? “Free” health care to gorillas in the wild?

I mean, just look at these gorillas…hanging around in the wild, waiting for a handout. Christ Almighty, are we creating a welfare state in the wild…making gorillas dependent on “the State” to solve their problems?

As one who has not had regular health care insurance since age 15, perhaps I should think about going into the wild. I am kinda hairy, after all. Perhaps I should get my freak on with gorillas…a gorilla welfare queen…and just sit back and wait for that free health care and free bananas…and all I have to do is amble by for a few pictures when ecotourists pop in for a visit. I mean, based on this evolutionary lice thing, it sounds like my ancestors got a little freaky with our cousins. Play “Gorillas in the Misty” for me. Oh, the humanity.

But let’s get back to the simple fact that this line–“free health care for gorillas in the wild”–actually made it into the story.

What was the reporter thinking? And the editor? Maybe they were thinking of comedy words. It would make sense, since the Times is about as newsworthy as the funny pages.

'So, two Hominids walk into a Singles Bar with a Gorilla…' has no comments