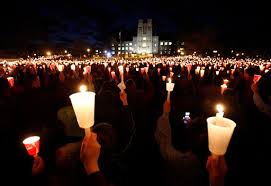 The massacre at Virginia Tech inspires language of disbelief, fear and indignation. The media, politicians and pundits offer ponderous meanderings through a maze of confusion built by one gunman in a moment of vindictive violence.

Once a name and a face, along with a thought-provoking package sent to NBC, were layered over the top of the random killing…our national attention turned to the question of “why.”

What would explain this?

What could explain this?

Who is to blame?

To the casual observer, and those of us who did not lose loved ones or have some temporal connection to Virginia Tech and Blacksburg are just that–casual observers, the obvious answer is that a troubled youth exhibiting obvious psychological warning signs just lost it…he went nuts and happened to have guns he could use to play out a twisted scenario: a personal, paranoid war against a perceived enemies.

But is this latest example of mass killing yet another anomaly we may never fully understand? Another example of how convoluted the human mind truly is?
Or is it just an outgrowth of who we are? Who we really are when we peel back the bucolic veneer of the American Dream?

Let’s be honest with ourselves. Despite all those heroic high school lessons in American history, the rhetoric we hear every election cycle about the goodness, generosity and peaceful intentions of America…the truth is that America and American history are replete with war, bloodthirsty campaigns against American Indians and Third World peasants, and violent repression and enslavement of an entire race of people.

We are a warlike and violent people. Always have been. Our God-given right to violence stretches back to our “Puritan” founders, our Colonial ambitions and the slaughter of those people who stood between us and our Manifest Destiny.
That was a long time ago. But the language they used–against infidels, Godless savages and “Imps of Satan”–echoes today in the War on Terror and our “Crusade” against “Evildoers.”

Violence punctuates our national myth–the Winning of the West, with shootouts and lynchings and posses riding out to mete justice on cattle rustlers. The entire founding of the nation “from sea to shining sea” was done with guns.
With killing and theft. With wars.

“War” is our primary national modality. Wars that mostly were, as history has shown to any willing to examine it, of choice and ambition and a bloodthirsty disregard for the humanity of our enemies. The Mexican-American War. The Spanish-American War and the brutal repression of the Philippines that followed. Too many campaigns against American Indians to list.

Since the end of the Second World War, the one “Good War” and our lone moment of moral superiority, it has been non-stop violence: the Cold War (and its numerous, violent “hot spots“), the Korean War, the Vietnam War…and countless little wars around the globe like Angola, Cambodia, Laos, Central America, hapless Grenada, Afghanistan, Panama, the Persian Gulf.

And we so love war that we declare one even when the intention is some common good, like the War on Poverty…on Drugs…on Cancer.

We have Presidents who’ve said that they are starting a war to keep the peace. Peace through war. A War on War, it would seem.

As we look at this one sociopath will we also look at the context within which he festered? An amorphous War against Terror that has cost countless “innocent” men, women and children their lives in Afghanistan and Iraq. Whole families killed by faceless bombs, large caliber ammunition fired from planes, helicopters and Humvees.

And what do we make of those Executive Branch sociopaths who ordered the mass killings we’ve inflicted upon the people of Iraq? Or thegunmakers who profit hand over fist fueling the wars we start? Or inspire others to start. The corporate heads of Lockheed Martin, of General Dynamics…are they, too, inexplicable killers who cause random death of innocents? The media, politicians and pundits spend no time questioning the psychology of the executives and scientists who create new and interesting ways of killing people.

In fact, we celebrate them…with huge salaries and Congressional kowtowing.

But what really separates them from the lone gunman? Profitability, perhaps?

Or what do we make of the thousands of “contractors,” a.k.a. mercenaries, who are riding around Iraq, armed to the teeth and making huge salaries. Or those who have been caught “randomly” shooting Iraqis civilians? They are reprimanded by their companies, but where is the national conversation about those mass killings?

It comes down to language. The language of mass murder, of random death dealt out by a crazed lone gunman, is reserved for those events that we ourselves are not directly complicit in. We do not feel complicit in the tragic event at Virginia tech. Or Columbine. Or any of the growing number of mass shootings our country has experienced over the last four decades. Those are anomalies in American society…examples of the mysteries of the human psyche and, in the ultimate Americanization, the price we pay to live in a free society.

But the mass killings that made our nation? That protect our national interests, like oil? The mass killings that happen when we drop bombs on civilians? Or what about the weaponry we, the world’s largest dealer of guns and military hardware, sell to governments and rebels alike? That we sold to both sides of the Iran-Iraq War?

Those are wars. Or for wars. And as a nation of war, we have found a way to disassociate ourselves from those acts of violence with the language of war: campaigns, battles, collateral damage, casualties, enemy combatants.

We create an alternate world of skewed morality to justify the wealth, the land, the death created by those acts. We indemnify whole peoples and their ideas and cultural affectations to rationalize the violence we portray as necessary and just. Paranoid worldviews predominate our history, particularly since the end of the Second World War.

How much of an anomaly is the lone gunman? Or has our culture reached critical mass…that to be an American is not just to be part of a culture of violent retribution, but an example of it?

'Critical Massacre' has no comments