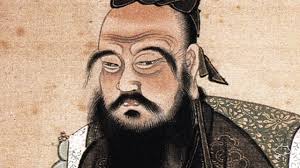 So, what does an ancient Chinese philosopher have to teach us about our post-Modern world?

Quite a bit, actually.

Since the 2000 Election, we’ve seen our national language deteriorate into Orwellian NewSpeak, into transpositions of black for white and into lies parading around as fanciful conventional wisdoms. Propaganda and truth, until Katrina came and washed away the media’s veneer of compliant patriotism, were fed to the American public, from the Administration by way of the news media, like MREs–a great Pentagon acronym for Meals Ready to Eat. Incidentally, the professional association of military reporters and editors is also called “MRE.”

Isn’t funny how sometimes people give us the truth unintentionally?

Confucius would marvel at just how completely we, the American people, have proven his axiom on “incorrect language.” But even his genius couldn’t foresee the power of the Corporate-American media. Still, he knew that a people who are propagandized cannot make judgments and, as we’ve seen for six years, “stand about in helpless confusion.”

Now, it is true that Team Bush had to steal the first election and that there is plenty of evidence that the Team did it again in 2004. You can’t fool all of the people…or even 51% of them, I guess. And it is true that at least 1/3rd of Americans saw through much of the propaganda offered up as truth since 9/11..and that number has grown. But those people also tend to hold their American brethren in contempt…for not being able to see through the often paper-thin tissue of lies that have been peddled by our Fearless Leaders and our Cowering Media. The Informed need to read Confucius. It is not so easy to stay informed when there is so much disinformation clogging the informational arteries…and for those who are struggling to stay afloat in this debt-ridden, fear-factored environment there is very little time to read all of the alternative news sources out there.

One of the great advantages Team Bush has is that it takes time and effort…and a serious dose distrust and cynicism…to wade through it all and make sense of it. They’ve cynically used cynicism to drive a wedge through the electorate.

It is true that the media is now more likely to ask questions, but it is still woefully inadequate to the Confucian task at hand. Team Bush is a disinformation machine…a prolific propagandizer and language engineer.

The Rectification of Names is a 24/7 job these days, and the confusion…along with the obvious deterioration of our morals and our art…is six years in the making (if not more, but let’s do this one presidency at a time!).

Here are some examples that need Rectification:

War on Terror: If it is indeed a war on “Terror”–meaning terrorism (it’s already imprecise language)–why do we support terrorism? We are supporting, through advisors in Pakistan and funding from Saudis like Prince Bandar, Sunni terrorists operating in Iran and Lebanon. And why didn’t we identify the source of the money and personnel behind 9/11–Saudi Arabia–as a State Sponsor of Terrorism?

State Sponsor of Terrorism: As we see above, this is a name needing major Rectification. Iran is a SST, but isn’t the US also a SST for supporting Sunni terrorist conducting a bombing campaign in Iran?

Terrorist: Anyone killing “innocent life” is considered a terrorist. How many innocents–women and children–have we killed in Iraq? What about Israel, which has killed dozens of children with indiscriminant bombs in the Occupied Territories since 9/11? Heck, they even helped to found Hamas, an organization labeled “terrorist” and who we are countering through Prince Bandar’s initiative to fund Sunni terrorists in Lebanon. Well, Al Qaeda wouldn’t even exist if the CIA hadn’t helped to create it in 1979 to, according to Zbigniew Brzezinski, to goad the Soviets into invading Afghanistan. So confusing.

Hostages: The just-released British sailors were hostages. Their confessions were coerced. So what does that make the hundreds of Muslims held for years in secret and not-so-secret prisons? What about their confessions? What’s the difference between British sailors and the five Iranians we took and are still hold in Iraq? Or the confession of Khalid Sheikh Mohammed to every plot imaginable?

Syria: Speaker Nancy Pelosi goes to Syria and sends the wrong signal. So, what was the signal sent to Syria by Team Bush when the CIA shipped “enemy combatant” Maher Arar (since cleared of all charges) on a private jet to Syria to be tortured?

Torture: We don’t even know what this is anymore. No agreed upon definition. This has led to the kind of moral decay Confucius predicted, hasn’t it? From Gitmo to Abu Ghraib, the US tortures because the language and definition of what torture is has been brought into question.

The “People” depend upon leaders, reporters and editors…upon the news media…to use language judiciously and accurately. They have an inherent need to trust those in power. A need that was multiplied by 3000 on 9/11, and magnified by the Anthrax Attacks and the continual drumbeats of war…on Terror, on Iraq…that followed.

The “Informed” should show some patience and spend more of their time attacking the purveyors of incorrect language and less time occupying an elitist perch above the “People.” We are all in this sinking ship of state together and there are few lifeboats left. Those bobbing on the waves of propaganda should throw a line to those sinking into the depths of it. Don’t blame the victim. Be Confucian and Rectify the Names under which all of this is being done.

'Rectification of Names' has no comments