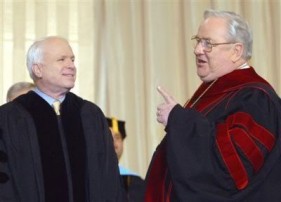 A fat pig of a man who twisted Christianity into a perverted rationale for hatred and bigotry.

That was Jerry Falwell.

No, I do not mourn his loss. I mean, I’m sure his mother loved him. And his family, I guess. Or maybe they suffered from Stockholm Syndrome. I dunno. But if he was a father and a husband, I send my condolences to the survivors. I think “survivors” is appropriate in this case, don’t you?

You see, my problem with Falwell epitomizes my general problem with American Christianity. It is typified by hypocrisy, hatred and a self-serving psuedo-theology of self-satisified self-aggrandizement. It takes Jesus’ amazing gospels…which preach unconditional love of enemies, of prostitutes, of the poor and of the downtrodden…and turns those expansive ideas into a exclusive, often racist rationale for killing infidels and for war in general. Somehow, the Gospels also became an excuse for making huge sums of money and a justification for telling the poor that they are poor simply because they not right with the Lord.

His brand of “conservativism” was all about punishing the poor, lowering taxes and stopping welfare payments. I guess he never read Jesus’s warning “…that a rich man has as much as a chance of getting into heaven as a camel does passing through the eye of a needle.”

Apparently, Falwell and most American Protestants (I was one until a youth pastor told me Satan put the dinosaur bones on Earth to trick mankind into believing evolution) have never really studied the Gospel of Matthew. Go read it. It’s a stunning, almost Commie-sounding diatribe against the rich and against materialism. It’s a clarion call to help the poor and the meek.

But it seems that “Christians” like Falwell never took the teachings of Jesus to heart. The absence of Christ’s teachings from contemporary American Christianity is what makes it so damn odd…and so damn infuriating. And Falwell was the living embodiment of that destructive dichotomy.

How about this little number from Brother Jerry:

In a 1958 sermon, Falwell said,“The true Negro does not want integration. He realizes his potential is far better among his own race. Who then is propagating this terrible thing? First of all, we see the hand of Moscow in the background . . .” [WP, 9/27/84; National Journal, 11/3/84]

The “true Negro”? What the hell does that mean? And, of course, he thought that only Communists would want to end segregation. I’m sure that Jerry would’ve identified Jesus as a Pinko infiltrator had he met him in person.

Hell, he even blamed secularism and homosexuality for 9/11. He said God lowered his “curtain of protection” over the Lord’s Land (that’s the USA to you and me) and, therefore, allowed the attacks to happen.

America, by turning away from the one true religion, forced God’s hand, which he used to screw up NORAD so the evildoers could attack us…which means God is at least partially responsible for the deaths of nearly three-thousand innocent people

But Jerry’s Christian piety never stopped that fat pig from taking money from Rev. Moon. Yeah, that Rev. Moon…of the Moonies! When his bullshit “Liberty University” was going into bankruptcy he took a couple million from Rev. Moon to bail out the school.

Yeah, I wonder what his Moral Majority would think about that if they knew it!

Somehow, Falwell never really got challenged by the media on his Moonie ties. Nor did he get hammered for his history of racism…even though his ministry was headquartered in the all-too appropriately-named town of Lynchburg.

No, Falwell stuffed his face for years…and got fat off his Moonie connections and his televangelism and his faux “educational” legacy at Liberty University.

And he also got to play political kingmaker in the GOP.

Since his rise to prominence on the eve of the Reagan years, the GOP has been a party of war, of empire, of enriching the rich and keeping the poor as poor as possible. Cutting taxes is good. Food for hungry people is bad. Racism is okay. Capital punishment…okay. All those things that are exactly the opposite of the teachings of Jesus in the four gospels…that’s what Falwell and his ilk taught.

And it’s also why I left American Christianity over 25 years ago.

'Jerry Falwell was a Pig' has no comments