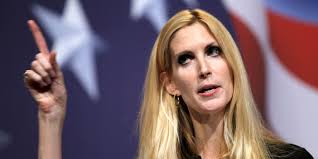 Ann Coulter. Ann Media Whore Coulter. I rarely give her the time or effort. She has been debunked, rebuked, proven to be a plagiarist…and she makes millions off of a contrived persona as an unapologetic right-wing extremist. Contrived. Yes, I think it is all marketing. Marketing of her books and persona, and she throws red meat to keep the GOP base fed. But she is, first and foremost, a media whore. She will turn any TV trick she can…all for a buck. For lotsa bucks. I don’t really blame her. It is the media pimps I blame. The people and producers and bookers and on-air talent who keep on giving her airtime simply because she is “good television.” That’s what we in the business call anything that is prurient, explosive or controversial. The more extreme she is, the more the pimps want to whore her out to their viewers. So, she’s got a new book out and she’s flat on her back, televisually speaking, turning her tricks. She’s said in a recent, book tour interview that women really shouldn’t have the right to vote. And now she’s upped the ante. On Donny Deutsch’s CNBC show, The Big Idea with…Donny Deutsch, Coulter made another shocking, news-cycle dominating statement. Here is the transcript: COULTER: Well, OK, take the Republican National Convention. People were happy. They’re Christian. They’re tolerant. They defend America, they — DEUTSCH: Christian — so we should be Christian? It would be better if we were all Christian? COULTER: Yes. DEUTSCH: We should all be Christian? COULTER: Yes. Would you like to come to church with me, Donny? DEUTSCH: So I should not be a Jew, I should be a Christian, and this would be a better place? (snip) We should just throw Judaism away and we should all be Christians, then, or — COULTER: Yeah. DEUTSCH: Really? COULTER: Well, it’s a lot easier. It’s kind of a fast track. DEUTSCH: Really? COULTER: Yeah. You have to obey. DEUTSCH: You can’t possibly believe that. COULTER: Yes. DEUTSCH: You can’t possibly — you’re too educated, you can’t — you’re like my friend in — COULTER: Do you know what Christianity is? We believe your religion, but you have to obey. DEUTSCH: No, no, no, but I mean — COULTER: We have the fast-track program. COULTER: No, we think — we just want Jews to be perfected, as they say. DEUTSCH: Wow, you didn’t really say that, did you? COULTER: Yes. That is what Christianity is. We believe the Old Testament, but ours is more like Federal Express. You have to obey laws. We know we’re all sinners — DEUTSCH: In my old days, I would have argued — when you say something absurd like that, there’s no — COULTER: What’s absurd? DEUTSCH: Jews are going to be perfected. I’m going to go off and try to perfect myself — COULTER: Well, that’s what the New Testament says. DEUTSCH: Ann Coulter, author of If Democrats Had Any Brains, They’d Be Republicans, and if Ann Coulter had any brains, she would not say Jews need to be perfected. Now, Donny was…giving him some credit…hosting her under the rubric of “Being Extreme Makes Millions.” That is, at least, not as disingenuous as having her on to talk about politics and society. Topics she should never be given at airtime to discuss. Nor is that the true intention when she is booked. She is booked to get ratings because they expect her to say something nutty and attract viewers…and to have other “news” shows reference her appearance. As in, “Tonight on Hannity and Colmes, we talk to Mr. X and Ms. Y about comments Ann Coulter made on Hardball with Chris Matthews.” It all pure spin and promotion. Lotsa heat. No light. And, in the minds of TV producers and executives, they love it when Hardball is mentioned on Hannity and Colmes, and vice versa. It’s all a media whoring and pimping orgy. And Donny Deutsch is more to blame, his biting outrage aside, than Coulter. Now his outrage and this exchange is pinging around the internet. It’s likely to be on one or more “news” shows during the next week…and has done what it was meant to do. He used a media whore to attract more “Johns.” The viewers are, by the way, the Johns. All I can tell you is to try an wear a condom. Just slip one over your remote and, hopefully, you won’t catch something.

'Media Whores and TV Pimps' has no comments