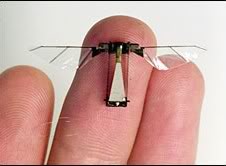 The Military-Industrial Complex. Very militaristic. Very industrial. And it’s really complex. They spend a lot of time and money thinking up new and intersting ways to kill people, immobilize people and keep tabs on people. We are all “people,” by the way. So, the latest technology to be rolled out on Americans is a bug. A bug in the detective, FBI wiretapping sense of the word…and a bug in the “bug” sense of the word. Here is one example:

Apparently, DC is buzzing (I know, but I had to) over the appearance of litle, mechanical dragonflies at an antiwar rally in September. They buzzed the crowd like tiny helicopters and were, most likely, being used for surveillance…to take pix and record sounds. Probably to keep building a massive database of people who are protesting the war. Frankly, this database was started before 9/11 by a guy named Admiral John Poindexter. You might recall his name…he was a key player in the Iran-Contra Scandal. Team Bush resurrected him and put him in charge of a huge data-mining database on ALL AMERICANS. It was called the “Total Information Awareness” network. But that is just one part of the massive effort to compile as much data on people as possible. We are all being tracked on some level. If you are reading this blog, you are on-line and, therefore, being tracked. You probably use credit cards and buy products (cars, razorblades, jeans) that have tiny little tracking chips called RFIDs. Google it. This little “bug bug,” though, is the leading edge of new and interesting ways for scientists to ply their trade against us…the people…and in the name of “national security.” They’ve made biological, nuclear and depleted uranium weapons. White phosphorous weapons, Agent Orange and various exciting and lethal chemicals. A new weapon being tested (where, they won’t tell us…but Iraq is likely) are “Directed Energy” weapons. Lasers. And microwave transmitters mounted on humvees that cook people. Cook ’em dead, or just make them VERY uncomfortable and are used for “crowd control.” And they are working on nanobots…tiny little robots…that can enter you through your nose and ears and travel to arteries and tear the walls…causing ruptures and death. Do scientists live outside normal human ethics? Many do. And much of this crap is developed at universities like Harvard and Berkeley. So much for “liberal” universities. The Military-Industrial Complex has been funding these projects on campuses for decades. Much of it is secret. Like these nifty bug bugs. “America can be pretty sneaky,” said Tom Ehrhard, a retired Air Force colonel and expert in unmanned aerial vehicles. No doubt! The Pentagon denies much of it…like the dragonflies. But the info is out there. They’ve admitted that “the nation’s fleet of flying robots logged more than 160,000 flight hours last year.” That’s four times more than 2003. Drones of all sizes are flying around the country. I saw a couple in DC after 9/11. It’s odd. But it’s also effective. Quiet and small, they can be quite “sneaky.” In the Military-Industrial world, it is axiomatic that whatever technology is admitted is ten to fifteen years behind the actual state of development. If they are testing microwave weapons? Well, the testing is done, and they are ten years ahead of what the public sees. The tests are the roll-out to get us used to the idea. So, use your imagination and think about the future. About the future of serious damn weapons and tracking systems that are already being used in secret, that we pay for with taxes…and are being used to keep tabs on us–the people who paid for ’em in the first place. Think about bugs and robots and flying drones and microwave guns that may be used to “control” us if and when we ever become “crowds” demanding that “our” government change. Think now, because it’s only a matter of time before they find a way to get in there, too.
Liked it? Take a second to support Newsvandal on Patreon!

'Something’s Bugging Me…and Everyone' has no comments