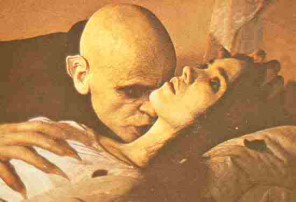 Vampires know a good thing when they see it. Or taste it.

The lore on mythic bloodsuckers often has vampires nursing a live subject, drawing blood over and over again without killing the victim.

See, it’s kinda funny (funny strange, not ha-ha) to think about the various ways the economy is growing.

All those sectors are going through the roof. And they are not growing because they make great products we all need to live better, efficient lives. Not like squeeze-bottle mayo, teeth whitening strips or disposable toilet brushes…things that truly make life worth living.

No, the three-legged beast of American wealth is predicated on war, crime and illness. Things most of us want to avoid.

So how do they grow?

If you were going to open an auto glass business in a new town, but had plenty of competition already in place, why not help things along? The weekend before you open, canvass the area with flyers announcing a grand opening sale. And also hire a group of thugs to go out with baseball bats and break as many windshields as possible.

Like investing in Halliburton during the end of Cheney’s time as CEO…right before his VP search committee discovered he was the right man for the job. You see, he’d driven H-Burton to near bankruptcy. The stock was under $10.

Since then? Well, if you knew he was going to strat a couple wars and that H-Burton would make bank off the whole shebang? You’d buy a bunch of discounted stock..sit for four to five years and open an account in the Bahamas to hold all that booty. The stock was over $230 at one point. I’m sure some people bought low and sold high. Some connected people.

Or how about the Carlyle Group? Run by Daddy Bush, various DC insiders and sycophants from his administration, it is now the nation’s biggest investor in the defense industry. Carlyle investors must be loving their bottom line after Daddy’s son started wars that led to TRILLIONS in defense and homeland security related spending.

Open up shop. Hire some thugs. Break a nation…and provide the weapons to clean up the mess you made. Or provide Blackwater security guards. Whatever…it’s a bonanza of investment opportunities.

Kinda like the various Saudi investors in Carlyle…including the bin Laden family. Now, the bin Laden pulled their money out after 9/11 because people began saying “WTF!” But Saudi Arabians and Saudi money have been the engine behind Al Qaeda. And then big Saudi investors, along with their close Bush cabal buddies, sit back and profit off of all “glass” those terrorists break around the world.

On prisons…the vast, overwhelming majority of people in our burgeoning prison system are there for drug-related charges. It causes parole boards to release rapists, for instance, to make room for stoners.

So, what do you do get people to commit crimes? Well, start a war on drugs. But that’s not enough, because the CIA was actively involved in importing cocaine during the 1980s. Cocaine that led to the crack “epidemic.” Which led to 1 million back dudes being imprisoned.

Now, what if you’d seen firsthand both sides…the importation and the crimes. What if you were in the CIA or the National Security establishment and knew that prisons would continue to be a growth industry? Well, you might go on to join the board of Wackenhunt, one of the leading operators of privatized prisons! Former FBI director Clarence Kelley did. So did former NSA director Bobby Ray Inman, and also Daddy Bush’s former Defense Sec’y and deputy CIA director Frank Carlucci…who, not coincidentally, has run the Carlyle Group!

Then there are those legal drugs everyone seems to be taking.

Depression is, apparently, rampant. There are plenty of drugs for that. Same with sleeplessness.

But look no further than diabetes for the big bucks. Wouldn’t it be smart to invest in fast food companies and in the pharma companies who make diabetes medications, make those lancets and blood sugar testers? Childhood diabetes is through the roof, and we know it’s from diet. The same goes with adult onset diabetes. So, gop invest in McDonald’s and in Merck or Pfizer.

Or you invest in food companies that use the food dye called Red 40. It has been linked to childhood hyperactivity. And it is everywhere…look at the ingredients in juices and sodas and all sorts of processed foods that kids eat. Why not invest in those foods and then in Novartis, the company that makes Ritalin? Or invest in the other companies who are making more and more ADD/HDAD drugs.

But it is easier be a Don Rumsfeld. His was head of Gilead Sciences when it developed Tamiflu. Designed to relieve the flu, it was a huge flop. It was expensive and only cut short flu symptoms by a few days. Gilead’s stock suffered. Then came the Bird Flu scare. Remember that? Yup, sorta disappeared from the news, huh?

Well, Bush and the GOP Congress pushed through legislation to deal with a Bird Flu epidemic. One of the solutions? Buy millions of doses of Tamiflu! Gilead’s stock went through the roof and Donny Boy made about $5 million practically overnight.

Now we have doctors with investments in the pharma companies, and they distribute free samples to people who then get prescriptions. They get hooked. Kinda like heroin dealers tying you off for free the first time.

There are so many investment opportunities out there. These are just a few. The key to making money in our land of opportunity is to be an opportunist. And to create opportunities where there weren’t any before.

Then you get an endless source of enriching blood. But suck it slowly and make sure it doesn’t dry up.

Apparently, vampires can live a long, long time that way.
Liked it? Take a second to support Newsvandal on Patreon!

'The Investment Vampires' has no comments