Blackwater, Blackwater…finally, the media is forced to pay attention to Blackwater.

If you are curious, Google it…look at Jeremy Scahill’s great book.

Blackwater is a private army of mercenaries who are making serious bank off of Iraq, Afghanistan, Saudi Arabia (protecting the Bushes’ royal buddies) and everywhere else the USofA is up to hijinx.

In 1991-2, then Sec’y of Defense Darth Cheney implemented the Revolution in Military Affairs…a plan to privatize as much of the Pentagon’s functions and duties as possible. Halliburton has made, and continues to make, bank off of this RMA plan. Ain’t that a coincidence?

Well, Blackwater is another company driving up to the taxpayer-funded ATM we call Iraq.Formed with operations like Iraq in mind (dudes, Iraq was planned way back in 1998 by the Project for a New American Century, a military-industrial complex funded Neo-Con think tank), Blackwater likes to train former military, cops and various Ah-nold/Rambo wannabes to run around other countries and “kick-ass.”

Would you like to see these dudes walking around your neighborhood?

Well, the Iraqis have to deal with scenes like this:

So…okay, fine. We have mucho macho gun-toters running around a country of brown infidels killing people for profit. Big deal, right? I mean…we are Americans, after all…and we’ve been doing it for centuries.

What seems odd is that Blackwater’s CEO, Erik Prince: 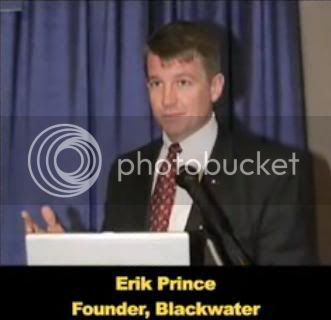 …is also the co-founder of the Family Research Council, Christian fundamentalist political action group! Christian. Didya get that? He co-founded FRC with Gary Bauer, the baby-faced Christian presidential candidate who talked openly about his “faith,” commitment to Jesus and Christian values!

Prince, who testified before Congress today, is also on the board of a group called Christian Freedom International.

The question that comes up for me, as a former born-again Christian who has actually read the Gospels, is whether or not these dudes have ever read anything Jesus ever said??? I mean, have they read the Sermon on the Plain in Luke?

Have they ever read the Beatitudes in Matthew, where the J-man said it was the “peacemakers” who are the “children of God?” Or that it was the “merciful” who will “obtain mercy?”

Have they ever read the most famous speech the J-man ever gave…the Sermon on the Mount?

There are two options to consider:

1) They are completely in denial, totally unreflective of what they do and who they say they are and the amazing hypocrisy they live in.

2) They are disgusting opportunists who use Christianity as a shield, a mask…to hide their nefarious and self-serving intentions.

Frankly, the latter is far more likely than the former. Historically, that is them.o. of dudes who profit from being false prophets.

Let’s just hope there is a J-man, and that he’s going to be plenty pissed when these snakes finally leave our Earthly grass and face judgment. It’s a long-shot, I know.

Preferably, we…as a nation…will try to make them pay here and now…and get a chance to see them in an overcrowded prison with a hardened population.

'When Christians Attack!' has no comments