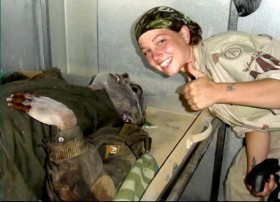 Perhaps it slipped by.

It is understandable, I guess…amid the awful economic news and housing crisis. Maybe you heard that there is now a company called “Just Walk Away” that helps an ever-growing number of people, for a small fee, simply leave their homes and bloated mortgages behind. That’s it. They just sign the house back over to the bank. The percentage of people who owe more on their homes than their homes are actually worth…is greater than anytime since the Great Depression.

Or maybe it was the political news that caught your eye, and the growing number of insinuations that Obama is Muslim, that he is not –“gasp”– a Christian. Yeah, yeah…you know that’s all been proven wrong before. Don’t hold your breath, though, because the Muslim thing is going to be a replacement issue for Southern Evangelicals who are actually uncomfortable with his skin color. You can always rely on Fundamentalist Christians to do that kinda smear job when an election is near.

I know, you got caught up in the story about the Israeli Defense Minister telling the Palestinians holed up in the most densely populated urban ghetto in the history of mankind–The Gaza Strip–that they would have “Shoah” unleashed upon them. Yup…Shoah, which is the Hebrew term for the Holocaust. Shortly thereafter dozens of Palestinian children died in a military campaign in Gaza.

Oh, perhaps you didn’t hear that one. Sorry…I forgot that news about Palestinian children dying is not really allowed on TV. Or news of an Israeli official threatening genocide. Not newsworthy.

Sorta like the oh-so-quiet release of more pix from Abu Ghraib.

…well, he has studied people’s involvement with torture for decades.

Ran experiments in the early 70s showing how easily people will fall into the role of torturer. Has spoken out over the last five years against the use of torture and the role of professional psychologists and psychiatrists in CIA and Pentagon torture programs.

This cool dude has a new book out…

…and he is speaking about the effects of torture on both sides of the equation. He is trying to explain how people can slip so easily outside norms and become monsters. He is using new pix from Abu Ghraib to make his point, new pix like these:

Just look at that smile. At that burned Iraqi. And think about the way the rest of the world, particularly the Islamic world, sees us.

He, the charcoal man…is an obvious victim. But what of her? Can she walk away from this without being burned on some basic level? Does the image smolder inside her psyche…like it does mine?

These pix, however, didn’t penetrate the current wall of media sound+vison that drowns out and obfuscates so many stories.

It is just as well, though. We wouldn’t want to face this sorta thing more than once. It might be “torturous” to sit through another news cycle of that old story.

We are being victimized all the time. The news is bad. The economy is bad. Gas is expensive, and now we are in a huge wheat shortage. Not kidding, a wheat shortage.

The media is shrill and it sometimes seems like are torturing us with the same damn story over and over and over. There is WAY TOO MUCH Nancy Grace on the air, that is for sure!

So, fair enough that they ignored the new pix. And the “old story.”

We really don’t care much anyway. Now that we’ve seen it, we are immunized against shock…no longer in awe of the gruesome things done in our name and by our countrymen. The people who gave the orders were never held accountable. Rumsfeld is tucked away at Stanford…Zimbardo led a public protest of his arrival, by the way. Titan, the private company who ran much of the torture…still making bank in Iraq.

And then there is us.

The outcry fades. Guantanamo remains. We are victims of circumstance, or it is not our fault, or they deserved because of 9/11 — because we…the transcendant victims…the victims in perpetuity…have the right to step outside the norms of humanity to “save lives” and punish so-called “evildoers.”

Their actions can never equate with our own…no matter what we do. Disassociate ourselves. Claim moral superiority. Do “what it takes” to preserve our superior moral order. We can never be or do evil, because we have a right to do it as the victim.

And now we, as a people, have succumbed to the Lucifer Effect.

'Victims' has no comments