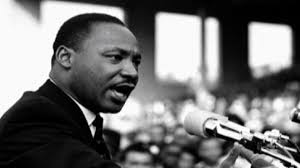 No cynicism. No clever phrases or jokes. No soul searching, or pondering my personal depths.

I just want to take a minute to note that last night I saw…hopefully we all saw…a moment that I never believed would come.

Although the lovely and brilliant Michelle Obama had to backtrack on her “I am proud of America for the first time” statement, I have no such pressure on me to say otherwise.

For the first time in my life, I am truly proud to be American.

My greatest American hero is Martin Luther King, Jr. I believe he is the greatest American who has ever lived. Last night, I saw his dream realized, the uncashed check of American history finally taken to the bank and paid…not in full, but it was, at least, accepted and some of the funds released.

I watched the events at Invesco Field from beginning to end, thanks to C-SPAN, and I found tears running down my face throughout.

Not because I believe Obama can change the fundamental imperialism and domination by the Military-Industrial Complex that corrodes the soul of this nation…because he cannot.

Not because I think the Republican Party is, at its core, run by blood-thirsty, elitist and amoral greed-mongers…well, yeah, I do believe that.

For all those slaves who lived through one of the great blights on human morality in the history of mankind.

For all those brave men who marched and demonstrated and tried so hard to endure Jim Crow and segregation for the right to vote, to use bathrooms and lunch counters. Who simply wanted to be treated as human beings.

For Jackie Robinson and Hank Aaron and all those Black men who refused to let racism keep them from achieving excellence.

We, as a people, have never quite faced up to the desperately immoral threads that weave through the history of our country.

But last night…last night I saw that there is some redemption in the soul and psyche of this nation. I saw a Black man…and his lovely family…take the stage and claim a position that, for over two hundred years, seemed unthinkable.

I also saw that my generation might be the last to know fully the perniciousness of our collective racism and that those who come after us have embraced a vision of race that transcends our past.

It is young people who made this moment possible. Please keep that in mind. Hip Hoppers of all races. Kids who grew up after the Cosby Show was a hit. After Michael Jordan became the most popular man on the planet. Kids who see Black Americans in ways that Martin Luther King, Jr. could only dream of…that he did dream of.

If Obama loses, it will be because we still have millions of racists. We still have a society that reacts to fear and propaganda. We still have an unpaid debt to history and to those peoples…Blacks, American Indians and people in countries around the world…who we as a collective have dominated, enslaved, murdered, bombed and stolen from.

But last night, with funky songs playing…with an anniversary in the ether…we saw that there is hope that we can transcend our history and be something more.

Please take a moment to reflect on this…because we all, in the context of American history, witnessed the single most important event we have yet seen in our lifetimes.

And feel free to shed a tear of redemptive joy.

'Tears' has no comments