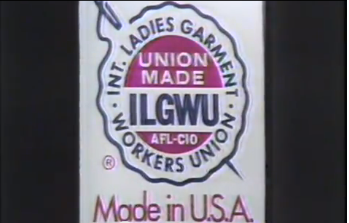 Why do anti-union crusaders and their corporate backers seem so bent on attacking teachers and public employees?

Well, it’s a simple matter of supply and demand.

They demand the opportunity to finally break the economic and political power of unions. And they demand that we somehow blame unions for the dysfunctional economic system created by corporations and their peculiar brand of globalization.

But the supply of unionized workers is dwindling.

Long gone are the days when you could look for the union label…and actually find one!

And that prescient ad ran during the salad days of union membership!

Just imagine what thirty years of erroneously-named “free trade” agreements, union-busting deregulation and labor-crippling legislation has done to the backbone of labor unions.

Well, you don’t have to imagine.

Look at the collapse of the steel industry. See the steep declines of the auto industry. And note the erosion of the skilled trades by a massive increase of wage-deflating immigrant labor, whether legal or undocumented. During the heyday of the middle class, a variety of jobs paid enough to support an entire family. Those jobs offered good benefits…good enough to keep families healthy and out of medical indebtedness. Those jobs also maintained the tax revenues and social bonds of towns both small and large.

But, for the most part, the thriving American factory town is a hollowed out relic.

It’s been replaced by corporate moaning about “competitiveness” and the declining expectations of working Americans. Big business knows what it is doing. They know from experience that even if you didn’t belong to a union, the presence of good-paying union jobs with strong benefits forced the larger labor market to at least offer competitive alternatives. Employers had to compete with union shops, particularly if they wanted to keep their shop from going union. But now that those jobs are gone, everyone is competing for fewer and fewer scraps with hungrier and hungrier workers.

So, by forcing Americans to contend with overseas workers, by keeping immigration illegal, and by perpetuating a financial boom and bust cycle that both drains middle class wealth and sustains unemployment, they’ve kept the supply of labor high and the demands of workers low. Even though America’s corporate captains sail into richer and richer waters every year, they ratchet up their demands on America’s workforce. As the years go by, unorganized labor accepts working harder for a lower standard of living, with fewer benefits and less government.

And if it doesn’t?

What remains for the forces of wealth reallocation and corporate power is the lingering, although waning, ability of unions to spend money on elections. And teachers offer the search and destroy mentality of American big business an ideal target of political opportunity. The decline of education is a drum beaten repeatedly by the media and politicians. There is no doubt that something is wrong with education. What is in question is whether or not unionization is the problem. There doesn’t seem to be a correlation between the two. Still, we hear quite a bit about the need for “accountability” and the specter of “bad teachers.”

Meanwhile, we hear very little about the need for “accountability” in a culture that increasingly rejects basic premises of science and few dare to mention the specter of “bad parenting.” Maybe the problem is the way we raise our children. Or the “powerful” economic forces that drove both parents into the workplace and left children to be raised by TV, video games and their peers.

Certainly, the “powerful” teachers’ unions have done little to increase the wages of their woefully overworked membership. Teachers sure don’t make as much as the publicly funded lawyers who work so hard in Congress to vilify them. Or the CEOs who don’t have to rely on them to teach their privately educated children.

But, like all public employees, they do have big pension funds. And those funds might be the real target of these anti-union activists. Because Wall Street feasted on those pension funds during the tech and housing bubbles and now states are looking for a way out of making up the losses. Of course, the crimes of Wall Street go unpunished while states around the country punish their citizens with severe budget cuts. The ultimate goal of the anti-union crowd rests on bankruptcy. If they can force states into bankruptcy, they can alter the terms of union contracts and alter the promises of pensions. Keeping corporate taxes low and Wall Street shell gamers free is job one for these folks.

So, unions find themselves trapped in a Bizarro World where the rights of actual people—i.e., workers—are considered “destructive” at the same time corporations are granted the full rights of American personhood. As the Supreme Court says, “Corporations are people, too.” And those corporate “people” get to “collectively bargain” job-crushing trade deals with foreign governments which are, ironically, negotiated by tax-payer funded intermediaries in the White House and Congress. Yet, it is the actual person on the losing end who gets the blame.

Maybe the problem is the union label.

Union workers used to be as American as trucking. As muscular as a steel worker. As symbolic of “freedom” as the automobiles they built. Branding is everything in 21st Century America. Politicians rely on labels to brand their opponents and wedge their way into office. And they’ve found their label du jour in the new face of unions—“the teacher.” They’re soft and college educated and, perhaps, effete. They work with children, after all. You gotta be careful of someone who spends all that time with children, unlike the successful wealthy people we love to celebrate. They, like so many politicians, hire nannies to do that sorta work.

Simply put, teachers are not glamorous, “job shifting” entrepreneurs and CEOs who make huge profits, avoid taxes, drive European sports cars and score young, blonde models. Although the union-baiting folks in Wisconsin’s legislature can easily find a group of wealthy, cool, muscular and successful union workers right in their own backyard. They’re called the Green Bay Packers. Perhaps they’d like to tackle them, too.

'Rewriting the Union Label' have 2 comments