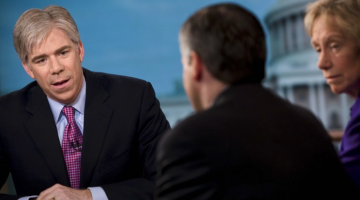 Meat, the Press. If only we could barbecue them and feed them to their masters. It might provide a few of the “jobs, jobs, jobs” they just spent way too much time bloviating about. Gov. John Kasich, an overly made-up female economist, the CEO of long-time defense budget leech Honeywell, a token brother from the Urban League and a haircut from CNBC…all chanting mantras from a bygone era. All lip-syncing tired tunes about the debt ceiling, taxes and “job creation.” Look here…nothing is going to create jobs. No tax cuts, no deregulation, no deficit reduction….nothing. The jobs are gone. They are in the labor camps of China and the techno-sweatshops of India. Globalization has exempted our Neo-Medieval master class from the social contract and long-since broken the outdated economic models I just watched this inane panel prattle on about…without a second’s worth of reality seeping into the discussion. The super-rich keep making money. Why have corporate, banking and investment profits kept rising during this ongoing recession? Because they invest in the “global economy.” They are busy creating Middle Class bubbles over there…bubbles they will eventually burst. They will hoard the wealth during the inevitable collapses, just like they’ve done here over and over again since the coming of Reagan. And if a stagnant America devolves into a Neo-Medieval society of wealthy lords and a mass of peasants and beggars? So what? All they need us for is to fill the ranks of the military, which they use to protect their far-flung investments and resource-rich pseudo-colonies. Their super wealth now means they can afford the best in private health care, private schools, private security and exclusive, gated, private communities. They live in a walled-off, private version of America. In a few decades, once the Middle Classes of China and India get too much political power, ask for higher wages and equality and social services, the peasants of America will be ready to work for the wages that the Chinese and Indians will, in their anti-competitive hubris, be unwilling to take. Jobs? Cut taxes. Reduce spending on anything that doesn’t benefit those at the top. Yes, let’s stoke the “investor class” into “risking their money here” by giving them more and more tax breaks on the capital gains they’ve been continually enjoying even as the Middle Class goes extinct and nearly everything they buy is made somewhere else. What a joke. And what a bunch of morons we have warming the pricey chairs stationed around those Sunday morning roundtables.