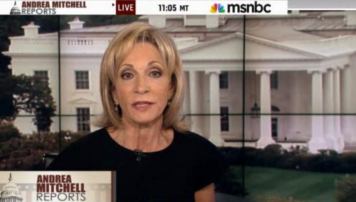 Am I the only person who doesn’t want to hear anything Andrea Mitchell has to say about the economic crisis? Or the debt ceiling?

Or, for that matter, any of her bloviations about the ways Washington is “broken” and, therefore, cannot seem to rectify the financial disaster created by…her husband?

And when power-players decide to “meet the press,” they sometimes end up pressing the meat.

Her bedfellow just so happens to be the one man most responsible for jury-rigging the money supply and jimmying lending policies to favor the wild speculation of financial predators, to unlock the insane greed of Wall Street and is the man who personally blew up the internet and housing bubbles like a kid with twenty pieces of Middle Class gum in his drool-drench, power-puckered mouth.

And we get to watch his wife sit there and smile through her artfully-tightened face while she “reports” misdirected, mostly meaningless “news” on the story her husband helped to create in the first place.

Nothing, and I mean nothing, is more emblematic of the failure of our republic than is the way D.C.’s journalists are, literally and figuratively, in bed with the power elite who run this money laundering scheme we call America.

Frankly, every time she comes on camera she should be identified as Greenspan’s wife.

Although, she never really says anything, anyway. Maybe that’s the point. She creates dead air that cannot be used to expose the failures and transgressions of her husband and his team of greedy devotees who’ve sold our present to cushion their future.