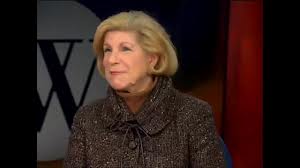 I happened to flip on ABC’s This Week with BlahBlah Amanblahblahpour today…and she had a crappy panel discussion on the News of the World/Murdoch scandal.
Nina Totenberg of NPR was on the panel. Yup, the reasonable, much-respected Nina of that last bastion of American journalism.

She described the monolithic nature of media monopolies in Europe…Berlusconi in Italy, how the Murdoch empire was integrated into politics in Britain and how those foreign politicians feared being on the wrong side of Murdoch’s company. She lamented the role of media monopolies in these far-flung and distant lands.
And she said with an oh-so reassuring tone, “we’re very lucky that we haven’t experienced that in this country.”
She is either a fool, or a stooge or…worse of all…both.
If you get a chance to see it online…oh, perhaps it’s better if you don’t. Unless you want to revisit your lunch.