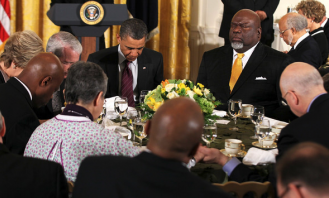 Or something like that…because a mashed-up, mixed-up cliché seems all-too appropriate in this age of viral internet gobbledygook.

You know, the sort of gobbledygook that gets sent to you by a distant, super-patriotic cousin. It piles up in your spam folder or, if you don’t have friends and family dangling somewhere along the lunatic fringe, you see this type of info-blight discoloring social media sites disguised as the latest and greatest shocking “news” item.

And the angry Christian gobbledygook is the worst.

The visceral nature of their attacks and their preternatural ability to suspend disbelief can make you feel like you are trapped on an evil Disneyland ride…a bizarre version of “It’s a Small World” where the sound is cranked up to ear-piercing, AC/DC concert levels, the claustrophobia-inducing boat is forever rocking like a fishing trawler in a tsunami and the animatronic puppets all look like disgraced televangelists.

It’s a rapidly-looped recitation of all of the vitriolic slander, all of the uninformed judgmentalism and all of the jingoistic slogans that cause your spine to stiffen and your blood to boil.

But you can tune it out. Right?

And if you can’t, what’s left?

Right. Left. Who knows what’s what, anymore? Because that’s the real problem with these bogus little email equivalents of Typhoid Mary…they infect you and force you to generate facts like white blood cells in a futile attempt to fight off the disease of ignorance.

In the case of President Obama, a man who…in the eyes of many Holier-than-Thou-vangelicals…seems to be suffering from a terminal case of Unforgivable Blackness, it is so hard to ignore the incessant attacks on his dark and shady origins, to elude the allusions to his secret religious agenda and to disregard the insanely ill-informed claim that he adheres to some radical political ideology.

Socialist. Communist. Anti-colonialist. Foreigner. Kenyan. You name it, he’s been called it. But they always come back to…Muslim. It encapsulates it all into one dark, evil ball of self-righteous indignation. Anything that shows he is the enemy of Jesus and his merry band of Capitalistic Christians…that’s the post-9/11 ticket they like to punch the most.

This one is circulating now, a re-hash of a months-old “FOX Nation” article about his failure to release an Easter message. It also points to a suspicious “Hey, can’t we all get along” message Obama taped for the beginning of Ramadan. Obviously, Obama hates Easter. And he loves Islam. Right?

It wouldn’t have anything to do with trying to calm the hornet’s nest we’ve been kicking for the last decade.

Well, ten seconds of research uncovered the shocking truth…that, in fact, Obama held an Easter Prayer Breakfast in the White House for the second consecutive year and that…gasp!…he wants to make it an annual event. Of course, that little factino will never make it into the in-boxes of those who, according to a radical religious teaching, should “judge not, lest ye be judged.”

So, once again…the argument is not about policies. Not about the real problems facing real people in real time. Nope. Instead we find ourselves battling over the very nature of the facts and the basic premises of reality.

But the gobbledygook gums up the argument. It gets us caught up in these hyper-angry street fights over facile rumors, and the facts get drowned out in a cacophonous roar of schoolyard name-calling that forces us all to take one side or the other. All heat. No light.

Who benefits from all of this? Alas, it’s not the angry Christians. They proudly send their kids to fight in wars that do little more than protect corporate investments and sustain the rushing revenue streams that flow out of the Pentagon. And, in the twistiest twist of irony, the angry Christians end up abetting the champagne wishes and caviar dreams of the super-rich fixers who sit comfortably atop the pyramid scheme called American politics.

Sure, they might not get everything their Tea Partying proxies are clamoring for…and they know that. But the Right-Wing gobbledygook that holds the angry mob together is so infuriating, so irrational and, at times, so scary…that many of their Lefty adversaries find themselves willing to accept slightly softer versions of the very policies that make the rich richer and, ultimately, the rest of us squirm.

At least Obama has that going for him. He may have run out of hope and spent all of his change, but he can count on all that gobbledygook to keep half of America clinging to the facts, while the rest of ’em cling to their guns.