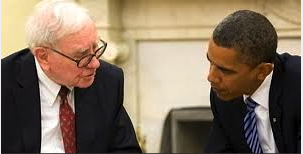 Warren Buffett announced that he and the wealthiest Americans should pay more taxes. Should pay more to sustain this system.
And the media backlash followed.
The claim was “class warfare.” The ever-reliable devil. The ancient behemoth stomping on the mythical tradition of American equality…one that has forever been trumpeted, but never been true.
The hardest part of living in 21st Century America is having to endure the loud, rapid-cut editing of America’s myths into a melange of half-truths and damn lies, all put into the service of those who can never have enough. The founding myths and the pious appeals to march onward in the service of God’s unique plan for American Exceptionalism, these are told by the forked tongues of parasitic intermediaries who front for the self-described Masters of the Universe. Those financially-endowed nobles teem along Wall Street and slink around K Street.
They want all the land, all the money and all the glory.
They want us to genuflect and to celebrate them for being exactly what America stands for…all while their very existence contradicts the very myths that sustain their best and brightest status in our darkening future.
They even want to spend the lives of your children to protect their financial speculation in oil-soaked, blood-stained lands.
But Buffett comes along and stands for something different. For a lie so sweet. One we all tasted during the heyday of the Middle Class. A taste so delicious and satisfying that it still remains indelible despite its fleeting appearance after World War II and it’s rapid demise after Vietnam.
But we remember. And we still crave it. The Oracle of Omaha serves it to us with his modest style, Midwestern charm and faint echoes of American common sense and decency.
Yet, he is also a rare reminder of how far we’ve fallen. It is worse than we know, even in our day to day struggles after the plug was pulled on the Great American Economic Bubble Machine.
This is how far:
And this:
Really, we are not a democracy. Nor are we a republic, or even constitutional. Not fascist. Certainly not socialist in any way, shape or form. Or even capitalist.
This is a new system. New-ish, really. For this is Neo-Medievalism.
Lords, nobles and kings own this land. They do so with the connivance of their de facto clergy–the politicians and media whores who front for, and give dispensation to, the new landed classes and, by allocating what’s left of the public treasury, dutifully protect and preserve their rapidly growing estates.
And there are the rest of us.
The peasants.
Amen.
Liked it? Take a second to support Newsvandal on Patreon!