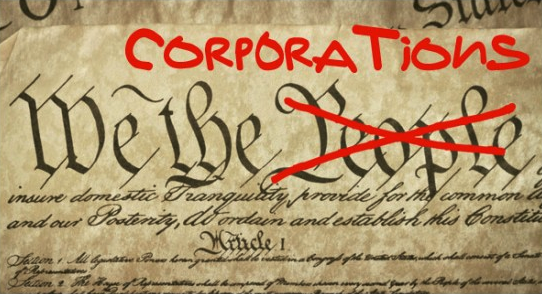 The GOP now has a proposal floating around the Congressional toilet…and this stroke of genius will eliminate corporate taxes. Gone. Why not? The way lawyers, lobbyists and lawmakers have rigged the tax code, and the way corporations are allowed to hide their profits overseas, the effective corporate tax rate is falling faster than Sarah Palin’s pants at an NBA shoot-around.

But…if corporations are “people,” and I, too, fall into the general category of “people,” does that mean I will not have to pay taxes?

Does that mean my precious, God-given tax dollars will finally stop being redistributed to the wealthiest Americans?

I won’t have to pay for the roads and bridges they use to truck their plastic consumer crap to their giant, caustic big-box stores? Or for the Navy and Coast Guard and Customs Service teats they’ve been sucking at for the better part of a century?

I won’t have to pay to deploy weapons and soldiers around the world to protect their investments in repressive regimes, access to oil and cheap labor and copper and just about anything that can be dug out of the ground?

I won’t have to subsidize arms deals to nefarious characters who we will eventually end up paying billions of dollars to kill off, anyway?

I won’t have to pay for the Department of Commerce or the State Department and their welfare programs that help corporations sell hamburgers to Asia and secure job-killing trade deals that ship entire factories overseas?

And I won’t have to pay for all the agribusiness subsidies and various other corporate kick-backs doled out during the frenzy of legalized bribery we call budget bill negotiations?

Heck, we are about to cut almost anything that will assist the swelling ranks of the poor, the working poor, the sick and chronically infirm…along with cutting off all those socialist children who must not associate freedom with a full belly and an education.

They need to learn, and learn quickly, that poverty is no excuse to be sick, hungry or uneducated.

So, let’s cut the rest of it. Let the corporations pay for all those government services they now feel so entitled to…as they lounge around the Cayman Islands like bloated welfare queens, expecting taxpayers to do it all for them.

Fair’s fair, after all.