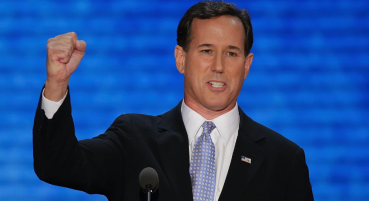 His candidacy is lancing the boil of festering ignorance that has hobbled our tiring, unsuccessful march toward modernity. He embodies a long-growing discomfort with anything that implies political, cultural or biological evolution.

Anti-science. Anti-social. Anti-anything that smacks of the common good, he is the last culture warrior standing on a battlefield increasingly littered with the corpses of racism and homophobia. Saint Rick seeks a political beatification of those tired canards of religious piety that actually take people down rather than lift people up.

Saint Rick is giving us the gift of understanding, both of where we’ve been and of where we could go if we continue to refuse the modern world. His vision is based in a trembling fear of the bonds of social cohesion, a social “ism” we must embrace if we are to survive as a people and a nation.

He is good for America because he has torn the curtain between the collective fantasies of long-held beliefs and the harsh reality of…well…reality.

And we are finally harvesting the bitter fruit of an educational rot that grips our zealot-based mentality and feeds our deeply-rooted belief in a divinely dispensed exceptionalism.

This is a fork in the road.

And Saint Rick is offering us a chance to choose the fiddle while civilization burns.

'The Devil in Santorum’s Details' have 4 comments