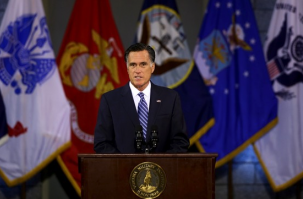 For the Palestinian people, mired in crushing poverty and resisting a multi-generational military occupation, Mitt’s little ditty about cultural superiority is an old song. It is one they and others like them have heard throughout the long history of land grabs, ethnic and tribal warfare and various campaigns of ethnic cleansing.

It is a simple matter of superiority.

Although Mitt made a predictable attempt to “walk-back” his comments after returning from a foreign policy-themed trip that garnered big laughs in London and the something-less-than “game-changing” endorsement of Lech Walesa in Poland, the argument for the rights of the superior is finding well-heeled champions here at home.

And if you want to find an incubator for superiority-minded pundicrats, look no further than the American Enterprise Institute. That’s where Marc Thiessen, the author of this telling Washington Post Opinion piece, sits back in the comfy chair of a paid fellowship and waits for his triumphant return to governance. A former speechwriter for Team Bush, Thiessen is well-schooled in the drumbeat of war and, by nature of his close proximity to W, well-versed in the quick identification of the political gaffe.

And he is here to tell you, my friends, that Romney’s statement was not a gaffe. It was the truth. The Palestinians suffer from cultural inferiority. Corruption, terrorism and lack of a free press…these indicate the depth of their inferiority. The shining culture of Israel, on the other hand, only further highlights the utter failure of the Palestinian people. That is, if they even are “a people.”

Thiessen is right about one thing…what Romney said was not a gaffe. It was one of those rare moments of truth when people inadvertently reveal what they really think and how they really see the world. The fact of the matter is that Palestinians are seen as inherently inferior by both the right wing in Israel and the right wing in America. Neo-Cons, like those languishing around AEI, simply see Israelis as superior. So do many Evangelical Christians. And so does Thiessen.

And get ready for a shocker…so does Romney.

But don’t be too surprised. It is part of a well-established American tradition.

You don’t have to look that closely at these assertions about cultural inferiority to see a mirror reflection of America’s own history. Take this idea of “cultural” inferiority being the root cause of Palestinian poverty, and simply replace “Palestinian” for “Black.”

It doesn’t take long to page through the annals of American history and find a plethora of similar arguments about the economic failures of Black Americans vis-à-vis “White culture.” During slavery they were thought to be better off on the plantation because of their inferiority. How about the segregation and suspicion of Jim Crow? Wasn’t the elevated position of Whites due to their superiority? For Black Americans under Jim Crow, any expression of displeasure with their plight was met with swift justice. Turn to the 60s, when the civil rights struggle and the inherent poverty of inequality led to riots and the rise of the Black Panthers. How would Thiessen explain those events? Perhaps with the language of the Reagan Era? Or with the bell curve of Charles Murray?

But it goes deeper than that. It is ingrained in the very founding of our nation, which was predicated on taking land from American Indians and putting it in the service of God’s grand plan. Read the telling statements of Cotton Mather and other Puritan immigrants about the new “Promised Land” of the New World, and you will find them dismissing the culture and, therefore, the humanity of the people who held the real estate they coveted.

Eventually, the “culturally inferior” American Indians succumbed to the almost supernatural imperatives of Manifest Destiny and had to be pushed onto bereft ethnic ghettos called reservations. Their rights and treaties and multi-generational claims to the land were simply disregarded or annulled by the edicts of overwhelming military power. And those who resisted the push into these ethnic ghettos were regarded as little more than terrorists who, by the way, sometimes fought with a religious, almost suicidal zeal that shocked their “superior” opponent.

This is not, however, the sole provenance of America. Examine the language and policies of Apartheid-era South Africa. Mitt’s ditty could’ve been transposed with “Afrikaner culture” and “Black culture,” circa 1979. Or 2012. Simply put: how hard it is to replace “culture” with “race?” And how far have we gone with transposing “race” with religious affiliation?

So, perhaps Thiessen has done us all a great service. He has pointed out that Romney’s little ditty was not, in fact, a gaffe. Whether it is Segregation, Indian reservations, or the slow-motion colonization of the West Bank…the song remains the same.

But pity those who march to a different tune.