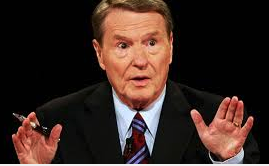 The verdict is in: Jim Lehrer lost the debate.

And it didn’t take long to come to that conclusion. Real-time disdain flooded the Twitter and Facebook feeds of the punditocracy and the people. Immediately after the “debate” ended, those elite opinioneers who’ve secured much-coveted television face-time blasted Jim’s failure to moderate, to manage or to generate more light than heat.

But they’ve got the wrong end of the stick.

Jim was, in fact, the right man for the job.

That wasn’t a “debate” he was moderating. No, it was “scenes from a marriage,” and Jim—a long-time creature of the DC media bubble—was more of a relationship counselor than a debate moderator. He gave it all away at a crucial point in the middle of a “tax and jobs” spat between the Red Tie and the Blue Tie:

“Governor, tell the president directly why you think what he just said was wrong.”

Oh, and don’t forget to use “I think” and “I feel” when you look him in the eyes and tell him. Well, he didn’t actually say that, but you get the picture.

It seems that Jim’s job was merely to find out whether or not there are irreconcilable differences between the two partners in the Two Party System. He set the tone early as he “suggested” to both the Red Tie and the Blue Tie that they were there to flesh out the “contrasts” and the “differences” between ‘em. Like an expert counselor, he facilitated an open and honest exchange of feelings and emotions. Okay, not much honesty. But the exchange did seem “open”…for business.

Still, like any good $250 per hour counselor, Jim created a safe environment and it worked.

By the end of the session, we all got to see just how much these two jilted lovers have in common and how much they actually agree on things! Did Jim, ever the deft handler of Ping versus Pong, help to move the two sides of the same coin toward reconciliation?

Probably not. At least, not on the surface.

No big deal since, frankly, that’s where all the consumer-tested differences end.

Just like the Two-Party System itself, the debate—along with the whole Red vs. Blue sports fan reality show election—is merely a consumer product. Something bought and sold and marketed and packaged for mass consumption. It is designed to be an entertaining horse-race, handicapped by opinioneers with bets taken by political bookies.

The financial elites place their bets to win, place and/or show, knowing full-well that the fix is in as they hedge those bets with one or the other party.

The blustery disdain of the political media for Jim’s handling of the faux debate only serves to highlight the extent to which this sham democracy of binary choices is fostered by the media itself. No one questions why we are only allowed two candidates on the stage, when there are plenty of other alternatives ready to offer answers to real questions about the real issues facing real people.

Libertarians and Greens, the Peace and Freedom Party, the Constitution Party, the Justice Party—all have candidates who are not beholden to the Two Party marriage. All have—gasp!—differing views on how to address a variety of issues. Although we Americans can choose from dozens upon dozens of breakfast cereal, we are only allowed to see two shades of political gray that are artfully re-branded as Red and Blue.

Ironically, the people might be getting exactly what they want. Or, at least, what they’ve been conditioned to expect. This headline for a recent poll says it all:

Be careful what you wish for, America. You’ve already got it.

Whether it’s the Red Tie or the Blue Tie who ultimately gets voted off the island, the super wealthy will continue to get super wealthier.

Drones will still drop bombs on new and exciting places, and all military-aged male victims will be deemed “militants,” while all women and children who die will be written off as “collateral damage.”

The private banking industry will retain control over the Federal Reserve and, in so doing, control the business of the government and the nation’s monetary supply.

The defense industry will have its multi-billion dollar trough reliably filled, give or take a billion.

The “healthcare” business will continue to deliver less for more, and profit from managing your sickness.

The oil and gas industry will continue to use taxpayers to subsidize their growing wealth, to get ever-more access to the public’s land and to rely on America’s sons and daughters to secure access overseas to valuable resources through an empire of military bases.

And the bubble around Washington, DC will persist as a recession-proof, semi-permeable membrane protecting the interests of the Political-Industrial Complex.