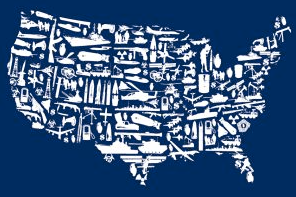 They are caught in the crossfire between profits and an unassailable national identity, and their numbers only seem to increase with each passing news cycle.

This carnage continues because a well-entrenched interest group refuses to relent, forever unwilling to cede their ideology or their profits. And the perpetual machinery of their power thrives on the artful conflation of one with the other.

But this is not the NRA.

The most powerful “gun lobby” in America is the MIC—the Military-Industrial Complex.

This is not some faceless, shadowy cadre of conspirators. No, those who charge “conspiracy theory” only show their ignorance. In fact, just like the NRA, the MIC is publicly disclosed and highly visible. In touting the accomplishments of the “Top 100” members of the MIC, Defense News wrote:

“The U. S. defense community encompasses the best America has to offer: leadership, innovation, technology and vision. It’s a combination that has helped ensure the U.S. has fielded the best-trained, best-equipped military force in the world for nearly a century.”

There is your leading gun lobby, America.

Note the “best equipped” part of that “journalistic” paean. This translates into trillions upon trillions of dollars spent on guns and weapons and bombs and bullets since the end of World War II.

Meanwhile, little-known massacres pile up overseas, even as they shock and awe us here at home. And while the Bushmaster is debated, the drone and the cluster-bomb and missile fly under the radar and through the budgetary process.

But the fix is in, anyway.

Unlike the NRA, the MIC isn’t limited to just spending money on lobbyists and advertisements and voting guides. Their influence peddlers pass unabated through the ever-revolving door between government and industry. They actually place their people in positions of power and then, in turn, they employ those Congressional aides, policymakers and former generals when they leave “public service” to cash in on their insider status.

The people who plot and plan and execute the wars can easily become the lobbyists who sell weapons of war to their friends and colleagues in Congress, the Pentagon and to regimes around the world. It is a perfectly closed system.

Even the all-powerful NRA cannot boast of such a “total influence,” one that is economic, political and, yes, even spiritual. Nor can it mount the sort of defense that the defense industry can, will and has whenever the idea of cutting the MIC’s budget is simply broached.

Big money on Vietnam. On Iraq. And on and on in Afghanistan, despite Osama bin Laden’s death.

The Cold War was the gift that kept on giving, but the Soviets simply couldn’t match America’s appetite for destruction. Enemies like that are hard to come by. Luckily for the MIC, an amorphous and ill-defined specter of terrorism stemmed the budgetary bleeding of that all-to-fleeting moment we called “the peace dividend.”

Finally, there were, and still are, dozens of “shadow wars” around the world, with the MIC funding and arming a motley crew of proxies and dictators and “freedom fighters.”

And neither does killing them.

So, as we glare sharply at the NRA and question the availability of guns here at home, perhaps it is time we finally address the fundamental hypocrisy at the heart of it all. This nation has been run by a much more powerful gun lobby for the last sixty years, and many have paid the price for a culture of violence spread the world over by the Military-Industrial Complex.

'The Other NRA' have 2 comments