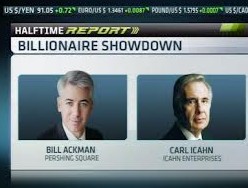 The epic battle between Icahn and Ackman, rival investors who’ve spent a lot of time comparing the size of their offshore bank accounts, played out in real time on CNBC’s appropriately-titled stock market blah-blah-fest — Fast Money.

And also in real time, the value of Herbalife’s stock fluctuated based on the ebbs and flows of the on-air quarrel between two lovers of money:

Interestingly, Herbalife spiked as Icahn started speaking, despite the fact the billionaire investor has never revealed whether he has a position in the stock.  From 12:47 PM to about 12:56 PM, shares in Herbalife surged from $43.52 to $45.58.  Icahn was repeatedly asked about his position, but the activist investor avoided giving any response.

The producers at CNBC must’ve been beside themselves with glee as these money changers hurled insults back and forth, each one taking turns deriding the “capitalization manhood” of the other!

This was Wall Street’s Jerry Springer moment. Or, perhaps, this was more like Maury Povich. We are still waiting for the envelope to determine exactly who is the “father” of Herblife.

Stay tuned…although, we know that there is no love lost between Icahn and Ackman.

Icahn made that perfectly clear at the end of the on-air tussle when he said directly and forcefully to Ackman, “I wouldn’t invest with you if you were the last man on earth.”

“Invest with you” and “last man on earth”? That’s a fascinating play on an old phrase.

The business of America is giving people “the business.”

'Carl Icahn Sums Up American Financial Culture in One Sentence!' have 2 comments