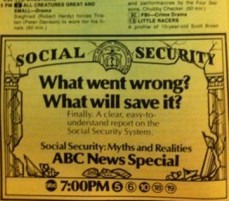 Few things in American life are as reliable as the perpetual “crisis” facing Social Security.

Although it has been artfully re-branded as “the problem of entitlements”—a change that couples it with spiraling Medicare costs and implies that the “entitled” get something they want, but do not deserve—the basic idea that Social Security is in deep trouble has been, not coincidentally, a relentless theme since the Reagan Revolution.

Hand-wringing over this crisis even got a full-hour, primetime once-over by ABC News on a balmy Sunday evening…in July of 1981.

And so is the desire to gut it.

Now, a couple of Ivy League social scientists have graciously offered their lofty opinions on the Social Security “crisis” under this catchy headline: “Social Security: It’s Worse Than You Think.” Their bleak assessment highlights the troubling demographics of longevity—people are not dying fast enough and government projections don’t fully account for their increasingly longer lives. The Ivy Leaguers came up with an $801 billion price tag to make up the difference between government models and their dire forecast.

“Almost a trillion dollars” is exactly the sort of high-impact rhetorical ammunition valued most by opponents of the New Deal as they dutifully wage their multigenerational fight against Social Security. Even better, the authors of this latest epitaph warn us that “tough choices have to be made.” In DC-speak that translates into “putting everything on the table” and “showing real leadership” and “hammering out a compromise.”

Their “solutions” focus predictably on raising the retirement age (because forcing 70 year-olds to keep working will do wonders for the lagging employment market), or cutting back benefits (because the cat food industry isn’t profitable enough as it is), or raising taxes on those unfortunates who earn a paycheck instead of reaping regular windfalls from stock dividends and trust funds (because they aren’t “job creators” with friends in Congress).

But there is an easier way.

In fact, the solution is surprisingly direct, elegant in its simplicity and almost guaranteed to work.

We need a national campaign to re-name “Social Security.”

It is time to re-brand it as “The Freedom Fund.”

Re-branding—it’s as American as freedom itself! And it works.

After World War II, the “Department of War” was re-named the “Department of Defense.”  That little semantic tweak gave the Military-Industrial Complex a lot of job security. Why? Because Congress votes yearly to fund the “defense” budget, not the “war” budget. Imagine if each year we talked about the growth of war spending instead of an increase in defense spending? Cutting “war spending” sounds a whole lot better than cutting “defense spending,” doesn’t it?

Not surprisingly, Congress likes to keep actual “war spending” out of the Defense Budget, and they’ve shrewdly funded wars in Iraq and Afghanistan as a series of separate bills called “continuing resolutions.”

Coincidentally, the Congressional Research Service reported in March of 2011 that Operation Iraqi Freedom (notice the use of  “Freedom”) cost a total of $806 billion—which would’ve been enough to cover the $801 billion shortfall in The Freedom Fund (a.k.a. Social Security). If we can easily spend $806 billion securing the “Freedom” of Iraqis, doesn’t it stand to reason that a reelection-obsessed Congress wouldn’t find some way to support The Freedom Fund for their fellow Americans?  Particularly in an election year?

Can you imagine a politician campaigning against The Freedom Fund?

Can you imagine a politician voting to cut The Freedom Fund?

Troops die overseas to protect it. The terrorists hate us because we have it. And, in spite of a decade filled with TSA pat-downs and warrantless wiretapping and extraordinary rendition and indefinite detention and extrajudicial killings, freedom is overwhelmingly considered to be “America’s Top Virtue.”

“Social” virtues like social welfare and social justice, on the other hand, are gateway drugs to the widely regarded sin of “social-ism.” As we’ve been told repeatedly, socialism is not compatible with freedom. That’s why politicians don’t want to be associated with anything “social.” And maybe that’s why Social Security is always in “crisis.” America is not pro-social. Based on how we treat retirement, healthcare and education, America seems decidedly “anti-social.” But everybody is “pro-freedom!” Although, it is funny how many people moan about socialism but love the security provided by those checks every month.

This is why it might just be a problem of branding, and not a problem of budget. It is a problem that was, interestingly enough, anticipated by the father of Social Security.

In 1941, FDR expanded the humane version of capitalism he set forth in the New Deal with a ground-breaking declaration of basic human rights. He called it “The Four Freedoms,” and one of the key freedoms was “Freedom From Want.”

A freedom beyond the simple right to choose from eight brands of fish sticks or ten types of smartphones or two symbiotic political parties.

A freedom for society as a whole, and not just for those who can easily buy their own, privately-funded freedom.

'Saving Social Security Is Easier Than You Think' have 5 comments