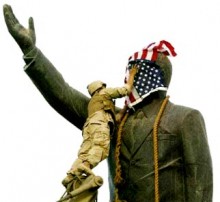 One hundred and ninety thousand lives.

That’s the percentage of Americans who do not believe the invasion, occupation and destruction of Iraq was a mistake. Even with what we knew then, it’s hard to figure that anyone would still endorse the invasion. Given what we know now, it’s a staggering and disheartening number.

But that’s not the half of it.

Put bluntly, since Obama first took the White House, more Americans have decided that the war was, in fact, a good idea.

How is this possible?

Although with little sense of irony or contrition, the mainstream media now openly debates the “failures” of Iraq: intelligence failures, a failure of planning, and a failure of oversight. New reports of “waste” and “fraud” only compound this sense of an epic failure. Of course, they stop short of criminality, accountability or complicity. To err is human, after all.

Some of the Neo-Con artists behind the grand pivot from 9/11 to Iraq now wax philosophical about the shortcomings of the big bait and switch. Prime mover Paul Wolfowitz told Fareed Zakaria that, although he really wasn’t an “architect,” he and the royal “they” failed to “understand the tenacity of Saddam’s regime.”

Yup, a little “failure” squirted past Paul’s dental dam of denial, although they remain firmly entrenched in the mouths of Dick Cheney, Don Rumsfeld and the cohort of chickenhawks currently biding their time at the American Enterprise Institute.

While some Democrats talk about “failures,” none dare mention the word “lies.” Many who marched lock-step to the beat of a diffident drummer prefer to regard Iraq as a problem of misallocation. The politically-attuned song they sing is a little ditty called “The Bush Administration took its eye off the ball.” They say Team Bush should’ve kept swinging away at Afghanistan rather than taking batting practice on the beleaguered, oil and target-rich nation of Iraq.

But everyone agrees—Saddam is gone. Iraq and the world are better off. Amen.

That’s how Obama modulated his “anti-war” stance as he passed through the semi-permeable “national security” barrier between “us” and “them.” He de-emphasized the mistake and “officially ended” the US part of the war with assurances that the troops left “behind a sovereign, stable and self-reliant Iraq, with a representative government that was elected by its people.”

Obama’s kinder, gentler “narrative” of what America left behind is both soothing and reassuring to a nation conditioned to conflate support of the troops with support for an unjust war.

Be comforted, because the world and the Iraqi people are better off without Saddam.

The equation couldn’t be simpler. In some ways, the debate ended the moment Saddam’s statue came down in that famous, well-orchestrated bit of stagecraft. Years of conflation built up America’s former ally and customer into a repository of evil. He killed his own people. He tortured his own people. He thumbed his nose at the UN and international law. He invaded other countries. His name was exhaled in the same breath as Hitler’s.

The evil and tyranny of Saddam—bronzed in that statue—ended the moment it fell.

That scene evolved into a persistent orthodoxy which set the baseline for future absolution. Freedom rang. The sacrifices of the troops were justified. Democracy won.

No matter what one can say about the waste, fraud, corruption, torture, death and criminality of the war—no one can argue that Iraq and the world are not better off with one less tyrant. Right?

It turns out that the world is not better off without Saddam. The Middle East is not better off. Most tragically, neither are the majority of the Iraqi people living in the lower two-thirds of that broken, obliterated nation.

The bad things about Saddam didn’t end with the invasion. In fact, the invading army made some of those worse and brought along a host of new problems: Shock and Awe bombing, white phosphorous, depleted uranium, Abu Ghraib, armed militias, Iranian interference, Blackwater, economic privatization and tens of thousands of civilian deaths that touched almost every household.

Even now, Iraqi ex-pats note that many Iraqis miss the days of Saddam. For them, it is a simple calculation: more safety, more wealth, more roads, more water, more electricity and more education. Women in particular were better off under Saddam’s secularist regime. On the eve of the original Gulf War, Saddam’s Iraq boasted one of the Arab world’s largest, best educated middle classes. It is long gone.

And so is the original case for invading, bombing and occupying an easy target of financial opportunity.

Most of the lies were blatant. All of the connections between Saddam and Al Qaeda were obviously manufactured. The WMDs never existed.

But Saddam is gone. And the whole world is better off. Amen.

The orthodoxy not only holds fast on this 10th Anniversary, it is gaining ground.

Therein is the final lie that masquerades as absolution for this young century’s greatest crime.

The Two Options on the Skripal Poisoning

'The Final Lie of the Iraq War' have 14 comments