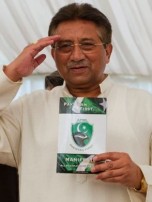 The drone war may have just taken out a high value target—former President of Pakistan and Bush Administration partner in the War on Terror, Pervez Musharraf.

No, he didn’t get blown to bits by a Hellfire missile, or die in a “Double-Tap” strike when he rushed to the aid of an unfortunate wedding party supposedly teeming with “suspected militants.”

Rather, simply by shooting of his big mouth, the retired general collaterally damaged the tumultuous pact between his former colleagues in both Islamabad and Washington. In fact, he blew another hole in the crumbling wall of obfuscation around Washington’s kill list.

What did Pervez say?

Eager to position himself as an instant frontrunner in Pakistan’s forthcoming elections, Pervez agreed to a bombshell interview with CNN in which he admitted to a “secret deal” between his government and the U.S. to allow drone strikes within his troubled, often drone-attacked country.

This directly contradicts the official position of the Pakistani government and instantly confirms the charges made by critics within Pakistan. It also confirms and highlights revelations now emerging from sharp reporting by Mark Mazzetti in both the New York Times and his new book about the drone war, The Way of the Knife.

Although it got quickly lost in the wall-to-wall coverage of the Boston Bombings, General Musharraf’s candor was a stunning development with geopolitical implications.

And it probably got Musharraf arrested. That’s right. Within a week of the interview, a judge issued an order for his arrest.

General Musharraf, who’d come back to Pakistan with the stated intention to run for the Presidency, quickly stated his intention to run for his life! But there was no escape. Musharraf was arrested on charges related to the summary firing of judges back in 2007 and was ordered held for two weeks. Now those charges have escalated to possible treason and perhaps even the assassination of Benazir Bhutto. He’s also been named as a target for assassination, and someone tried to bomb his home.

The timeline tells the story:

04.24.13: Bail denied, may be charged with Bhutto assassination

It is quite a turn of events for America’s one-time partner and the Pakistani Army’s most reliable strongman. The timing of the arrest and charges certainly highlight the fluid nature of Pakistani politics, along with the growing problem of the drone war and the fallout it is generating—not only in Pakistan, but around the world.

In this case, timing is everything.

Musharraf’s gambit—perhaps to position himself with the growing popular reaction against the ad hoc bombing of his country—came on the heels of a number of revelations about the conduct and cover-up of the drone war by the Obama Administration.

Not only has Team Obama mischaracterized targets and wildly under-reported civilian casualties, it also inherited a “quid pro quo” policy established in 2004 that traded access to airspace in Pakistan for the assassination of Pakistan’s political opponents.

The policy could best be summed up as: “We’ll kill yours, if you let us kill ours.”

This deal basically turned the CIA into contract killers and Musharraf, whether intentionally or inadvertently, verified this shocking alteration to a long-standing prohibition against assassinations by the CIA. More directly, it confirms the data which, as hard as it is to gather and collate, consistently illustrates that the drone campaign as now conducted by Team Obama is not really killing many “high-value” Al Qaeda targets. Instead, it is mostly killing a wide variety of so-called militants, military-aged males, civilians, first-responders and children.

When this growing body of evidence is considered within the context of Musharraf’s interview and Mazzetti’s reporting, disturbing questions about the drone war become ever-more acute and troubling.

Is the drone campaign really a war against “terrorists?”

Or, is the drone campaign a political tool being used to extend the reach and influence of Washington’s overseas ambitions?

Are drones the newest, easiest way to prop up allies, support regimes and eliminate the internal enemies of America’s functionaries and political cronies?

And what does this mean for the war in Yemen? Is Washington simply using drones to intercede in a civil war?

How about in Somalia? Or Mali?  And, of course, there is Afghanistan.

It is in Afghanistan that both NATO and the drone war are causing immediate problems. While the American media focused on the Boston Marathon bombings, the rest of the Muslim world and Afghanistan’s President Karzai focused on the murder of eleven children in a NATO airstrike.

Karzai has become increasingly critical of the CIA and the drone campaign, likely because he has to cope with the fallout and blowback right there in his own backyard. The Taliban is simply a fact on the ground in Afghanistan and, therefore, has to be reckoned with politically. Drones cannot kill ’em all, so Karzai is understandably perturbed by the consistent toll exacted on civilians, which only serves as ready-made propaganda for the Taliban’s insurgency.

Back in the USA, where the CIA used to overthrow regimes and support dictatorships the “old-fashioned way” with front groups, “freedom fighters” and drugs for weapons deals, the drone campaign offers them an assassination tool that flies under the cover of terrorism.

Since there is no actual scrutiny of what a terrorist is, anyone can be labeled a “terrorist” or “militant” and summarily eliminated, either at the secret behest of an allied regime or according to the long-term political and “national interest” imperatives established by faceless planners within the national security apparatus.

Whatever the reason is for a given drone strike, “terrorism” is easily applied ex post facto to any killing. Who can prove otherwise?

In fact, vociferous critics could be simply identified as enemies of the regime where the strike took place or as potential terrorists likely to target America in some dark, distant future. Anyone decrying the death of a proclaimed terrorist is a de facto “Double Tap” target.

Ultimately, what we are now talking about is the use of drones as a political tool, not a tool of “war” against “enemies” (whether real or imagined) intent on killing Americans simply because they hate our freedom.

Now we see the thin edge of the imperial wedge opening up a whole new realm of possibilities for political assassination—possibilities previously foreclosed in light of revelations from the Church Committee and Rockefeller Commission in the 1970s.

And now that the presumption of guilt is tied to a “Sci-Fi/pre-crime” standard of potentiality and the drive to execute both far and wide is predicated on securing airspace, is it not safe to assume that the deal cut with Pakistan in 2004 serves as a viable and, perhaps, likely precedent going forward?

Remember that law is not just about words written down in bills and constitutions and inspirational preambles—law is about precedent.

And the drone war as executed by Obama has cemented heavy bricks of precedent in the growing wall between previously-held ideas about the rule of law and a new paradigm of preemptive, secretive kill lists.

Unfortunately for Pervez Musharraf, he pulled a brick out of the wall and tossed it at the wrong people. But the hole he left behind does offer a staggering insight into the murky world on the dark side of the “War on Terror.”

'Drone Fallout: Decoding the Arrest of General Musharraf' have 7 comments