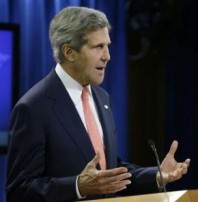 It is the mother’s milk of imperialism.

Whether it is in the service of “civilizing” barbarians, converting “heathens,” or, in its most recent incarnation, extending the reach of “democracy,” the bottom line of imperialism has always been the bottom line.

The bottom line of the infamous “White Man’s Burden” borne by the once-ubiquitous British Empire was merely the heavy weight—the pure tonnage—of the incredible wealth the colonials dutifully carried back home.

When the United States picked up “the Burden” after World War II, it became the world’s self-appointed champion of freedom, unreflective “protector” of inalienable rights and self-serving dictator of democracy’s terms and conditions. But it faced a problem—what is the rationale for empire in a post-colonial world?

The problem was solved ideologically and, truth be told, cinematically. “International Communism” emerged as if from central casting, like a 1950s B-movie invader from a godless Red Planet. Fighting it created the greatest source of publicly-funded largess in human history, often cycling tax dollars through client states that, in turn, spent the “aid money” at the All-American Arsenal of Democracy shopping center.

How ironic it was, however, that a nation born of revolution so quickly and easily became the counter-revolutionary stalwart against self-determination. Even as European empires fell, American power often came to the aid of the old regime’s remnants, propping up reactionaries and arming dubious freedom fighters. While the epic battle against Red totalitarianism gave America’s growing empire some ideological cover, it was the existential fear of releasing a global thermonuclear Leviathan that kept the Red, White and Blue façade intact.

Now, the Soviet Union is a distant memory. Nuclear holocaust doesn’t quite loom over the planet with the same inevitability. And a persistent thaw is releasing the dirty secrets of hypocrisy previously locked away by the frozen logic of the Cold War.

Perhaps that is why America’s national security establishment works so hard to preserve the Leviathan, now rebranded as the catch-all acronym of evil incarnate—the WMD.

This is, of course, in spite of Iraq.

An obvious “case in point,” it suffered massive destruction by a shocking onslaught of said weapons. In fact, Iraq’s significant toll of civilian causalities will continue to mount decades after the war because of America’s widespread use of depleted uranium—a chemically toxic, radiological weapon that was first used in the 1991 Gulf War and then used again in the 2003 invasion.

But don’t call that a WMD. Like Agent Orange before it, America’s “leadership” hides behind the veil of collateral consequences to obfuscate the mass destruction caused by both of those weapons. One defoliated. The other disabled armor. Any mass destruction was purely coincidental. But any hypocrisy you detect is completely understandable.

Without blushing, he referred to the “indiscriminate slaughter of civilians” as a “moral obscenity.” In an eerie echo of Dick Cheney, he expressed no doubt about claims the Syrian regime used chemical weapons against its own people. Apparently, Assad crossed the much-discussed “red line” in the sand drawn by President Obama. A deadly serious Secretary Kerry intoned with baritone forcefulness, “…there must be accountability for those who would use the world’s most heinous weapons against the world’s most vulnerable people.”

Yet, there is little accountability built into America’s barely-secret drone war against suspected militants in numerous countries. The heinous Hellfire missiles they launch “indiscriminately” kill civilians at an obscenely higher rate than piloted bombing missions. But those are not “technically” WMDs. Drones also purposely double back and kill “vulnerable” first responders after the initial attack. But those deaths are purely “conventional.”

Ironically, that story leads back to Iraq.

Longstanding claims of U.S. complicity in Iraq’s use of chemical weapons against Iran have finally been verified. Although previously dismissed as a loony conspiracy theory or the anti-patriotic musings of naïve peaceniks, the relentless journalists at Foreign Policy magazine forced a timely bit of bold truth into the black hole of historical indifference so often peddled by the bedazzled stenographers of the mainstream media. Declassified CIA documents, a key interview and some dark dots connect Reagan officials with foreknowledge and consistent support of Saddam’s use of chemical weapons during the Iran-Iraq War. The U.S. even provided satellite intelligence for a deadly chemical attack on Iranian troops in 1988.

At the time, Iraq was a surreptitious client state. And client states don’t get boxed in by troublesome red lines. Not by the nation holding the red Sharpie®.

So, while Egypt cracks down on “its own people” after a “not-coup” and Saudi Arabia continues its Taliban-like rule over “its own people” and a nuclear Israel continues to confiscate the land of another people, Syria becomes the next target in America’s ongoing struggle to remain atop the moral high ground.

To that end, the world’s leading nuclear power, with the world’s leading bioweapons facility and lingering stockpiles of chemical weapons will punish a non-client state in another undeclared war based on hard to verify charges stemming from a bloody civil conflict.

Perhaps that’s the only way to preserve the transparent walls around this American empire. Protest when others have rocks. Arm yourself and your allies with even bigger rocks. And pre-emptively or punitively launch rocks at the few glass houses in which you and your rock sellers are not welcome.

If nothing else, the need to replace launched “rocks” will generate some revenue for Raytheon, Lockheed Martin and the other merchants at the All-American Arsenal of Democracy shopping center.

Ultimately, that’s the bottom line of the American empire.