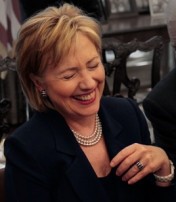 Let’s say you own an auto-glass repair shop.

Doesn’t it make a lot of financial sense to periodically hire a few thugs armed with baseball bats to go out and surreptitiously break a few windshields?

It’s Marketing 101. If you want to sell your product, you’ve gotta create a need.

That simple analogy may be all you need to know about Fox Entertainment’s likely involvement in NBC’s already-controversial Hillary miniseries and, sadly, the entire American Two-Party System™.

Why? Because American politics is little more than a business, and that business is, first and foremost, concerned with the bottom line. And the bottom line depends on shocking controversies, fits of outrage, simple dichotomies and stoking partisan fires.

Unity is boring. But division is hot and sexy and dramatic.

It ignites “consumers” of partisan ideology. It inspires a lot of spending by parties and candidates and SuperPACs on political campaigns and political ads. Ka-ching!

It feeds the political class. Consultants, fundraisers, ad agencies, candidates and political hacks ply their trade, sell their political products, make their ad buys and charge their fees. The grand total for the 2012 election cycle was upwards of $7 billion. Ka-ching!

And, of course, it supports the media. Spending on political ads every two and four years is how local stations often turn a profit and, increasingly, how cable networks pump up revenues. The more they “cover,” talk about and gin-up partisan politics, the better their bottom line. Ka-ching!

Is it any surprise that political “news” now dominates the cable networks?

It’s the cheapest news to produce. It practically comes to you gift-wrapped! Consultants, strategists and politicians will literally walk into the studio and start talking—often free of charge! Political news is continually piped into newsrooms from the wires, from press releases and speeches. And there’s an endless stream of wild statements on Twitter and Facebook and YouTube. You don’t need reporters in the field. Just pull a viral clip from the internet and voilà—insta-controversy!

Talk is cheap. Talking about all those controversies and personalities is really cheap. And that’s no joke. It equals advertising sold with low overhead, and that’s money in the bank.

Considering the way FOX News and MSNBC make their money and hold their surprisingly meager audiences, is there any doubt why NBC and Fox Television Studios are in talks to team up and re-boot the Clinton saga?

Do you hear the sound of breaking glass?

Not only will Fox Television Studios make money from the production and international distribution of NBC’s docu-dramatic Hillary show, but the announcement of this infotainment effort has also effectively kicked off what will be the longest, most expensive Presidential campaign in human history.

Unfortunately for the few journalists still toiling away at FOX or NBC, the debates they’re having are with themselves. Chuck Todd, in particular, has voiced his displeasure with the miniseries and its potential impact on NBC News, but he also still thinks there is a “giant firewall” between the news and entertainment divisions.

Alas, it is a distinction without a difference. Politics is a business and there is no business like show business.

Like the wholly-owned folks at NBC, the folks at FOX News cannot really claim independence from the folks at Fox Television Studios. Although Rupert Murdoch engineered a division of print news from the entertainment divisions after the phone hacking scandal, FOX News is officially an asset of 21st Century Fox, not the new News Corp.

Stock splits notwithstanding, the butter on the bread still ends up in the same corporate mouths. The stockholders of both 21st Century Fox and News Corp will benefit mightily from Hillary’s candidacy, from an outrage-inspiring Hillary miniseries and, when all is said and done, from a Hillary presidency.

And that’s the kicker with the whole Two Party System™. No matter who loses, the same people keep on winning. When Bill Clinton shepherded the 1996 Telecommunications Act through Congress and onto his desk, Murdoch’s News Corporation was a big winner. When Bill left his human stain on American politics, FOX News was a big ratings winner. And when Hillary finally became a political candidate, she was fêted by Murdoch at a campaign fundraiser in 2006.

Murdoch doesn’t adhere to ideology. He sells it. The same is true of MSNBC, which tattooed every anti-Constitutional softball the Bush Presidency tossed into the strike zone, but is now loathe to admit that Obama differs little (and may be worse) on the War on Terror or the surveillance state.

If ideology is fog, these two media partners—like the Republican and Democratic Parties they amplify—produce lotsa hot air that does little more than fog up the window between the financially insecure masses and the trans-party elites in the national security state, on Wall Street and in Washington, D.C.’s permanent political class. Isn’t it telling how they all seem to prosper regardless of political outcomes?

Even more telling was a Freudian slip by glass-breaking thug extraordinaire—Rush Limbaugh. He recently told a caller named “Tony from Tampa” to stop watching political hacks on FOX News because “…they’re designed to get you ticked off. They’re designed to make you question your sanity.” Although Rush quickly explained away his momentary lapse into reason, his statement betrayed the simple truth about American politics—the show must go on.

And for the blatherati at FOX News and MSBNC, the talking points will practically write themselves.

'Why Would Fox Produce the Hillary Miniseries?' have 2 comments