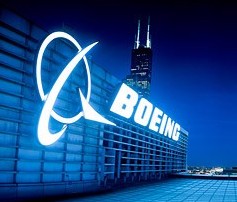 Yes, you read that correctly—negative 1.4%.

According to a new report from the Center for Effective Government, one of America’s biggest corporations, with profits ranging from $1.6 to $5.9 billion over the last five years, found ways to whittle down its effective tax rate so much that it became, in effect, a source of revenue as they reaped a whopping $82 million tax refund on $5.9 billion in profits.

And this isn’t new.

As Scott Klinger at CFC points out, “Over the last six years, Boeing has reported $26.4 billion in pre-tax profits to its shareholders, while claiming a total of $105 million in refunds from the IRS [for] an effective tax rate of -0.4 percent.”

Boeing is also the second largest federal contractor. Last year, the aerospace, aircraft and military hardware giant captured 4.4% of the federal contracting pie, which accounted for just over one-third of all of Boeing’s sales!

Public servants in the White House, the Pentagon and on Capitol Hill redistributed $20,182,591,732 of taxpayer wealth to the patriots populating the plush boardrooms of a 36-story skyscraper in downtown Chicago.

With that type of reliable, tax-free income, you’d imagine that Boeing’s corporate headquarters might just be one of the happiest places on earth. But the denizens of Boeing—like CEO W. James McNerney, Jr., who pulled in $27.5 million in 2012—are not sitting alone in the cornered market of defense-related spending. They and their cohorts who sit atop a great federal contracting pyramid scheme—Lockheed Martin, Northrop Grumman, SAIC, Raytheon and General Dynamics—are in no small part why the Washington, D.C. region is the reigning champion in economic confidence.

In fact, Gallup’s tracking survey found that D.C. is the only place in America with any economic confidence at all. Of the fifty states, every one of them has a confidence score mired in the negative. But D.C. scored an astonishing +19 in the most recent tally. In case you hadn’t noticed, the D.C. real estate market shrugged off the Great Recession of 2008 and, beginning in March of 2009, it has registered positive growth each and every year since.

As the Wall Street Journal declared in 2013, the nation’s capital is “a boomtown!”

Unlike Boeing, companies like the aforementioned Northrop Grumman and SAIC, along with uber-luxury carmaker Bentley, have decided to move their headquarters into the region and, therefore, closer to the cutting of the contracting pie.

And that pie is getting bigger.

The spike from 2000 to 2010 is staggering and, not coincidentally, concurrent with the coming of the Global War on Terror, the establishment of the Department of Homeland Security and the growth of the NSA-Spying Complex. Since 9/11, the iron reliability of defense and national security-related spending has drawn profit-seeking companies into the D.C. area like moths to an eternal flame.

It has also enriched elected officials—the Representatives in this so-called “representative government” who are charged with the duty of serving the public interest. Infamous examples like Halliburton, Blackwater, the Rendon Group and the hilariously-named “Custer Battles” are exactly what we’d expect to come out of the revolving doors at the Department of Defense and the Pentagon.

Rather, it’s the cronyism and job security system of self-serving public servants in Congress that strips away—almost irrevocably—the veneer of democracy or the sense that voting even matters. The defense industry is among the most generous when it comes to lobbying, campaign donations and financial glad-handing. The list of top defense dole-meisters features the usual suspects: Lockheed Martin, Raytheon, Northrop Grumman and, of course, Boeing.

Predictably, Boeing has invested $1.09 million in the current election cycle. Those contributions have been split fairly evenly—with 42% going to Democrats and 58% going to Republicans. It’s always good business to hedge your bets. In the 2012 election cycle, Boeing topped out at $2.829 billion, giving 46% to Dems and 54% to the GOP. When you consider the $20 billion in government contracts and the tax loopholes, exemptions and incentives that allowed them to turn “the highest corporate tax rate in the world” into a negative tax rate, that’s some serious ROI (return on investment).

If Boeing has designs on the top spot, it will really have to step up its game. That’s because Lockheed Martin—the grand champion of revenue development—not only spends like a drunken sailor in a friendly port, it does so with the same sort of discrimination as lonely seaman. In 2012, Lockheed famously gave campaign contributions to 90% of the House membership. That’s 386 of 435 “Representatives” getting a taste of Lockheed’s magnanimity. And they gave “donations” to 24 of 25 members of the House Armed Services Subcommittee charged with “oversight” responsibilities for the F-22 fighter. The average gift of their patriotism came to $6,130.

Overall, the defense industry lavished $27,647,731 on the 2012 election and has made a $10,056,494 down payment on the coming 2014 election. Not coincidentally, many of the contractors teeming around the NSA-Spying Complex also give big and it was duly noted that members of Congress are far more likely to vote in favor of the NSA and against spying limits if they just so happened to receive financial contributions from companies with a vested interest.

It should also come as no surprise that long-time defense contractors like Lockheed Martin have branched out into the very “technology services” that economist Stephen Fuller says accounts for 70% of the $82.5 billion spent in 2010 on contracting in D.C. area.

No doubt, this effusive government spending turns into jobs and that’s a big reason why D.C. is so darn confident. Since the inception of the Cold War, the defense budget has often been used as a de facto jobs program—a rising tide of “military Keynesianism” that lifts just enough boats to keep the whole enterprise from sinking.

But the wealth isn’t spreading around like it used to, and years of defense-related “tax and spread” sacrosanctity have finally worn thin on a war-weary population. When compared to the stagnant or declining wages most Americans earn, and the taxes most working Americans pay, the patriotic mantra that “we’re all in this together” is belied by Boeing’s $27.5 million CEO compensation package and the “effective” tax rate his corporation has transformed into an “ineffective” tax rate.

And now that money is speech, the only people who truly have a voice once the election is over are those corporate persons whose spending changes their clout from a dim whisper to a resounding scream. That voice is why the defense budget is slated to rise once again in 2016.

Don’t fret, though. Even though your voice is unlikely to be heard above the din of D.C.’s cash machines, at least you know someone working as a contractor in the NSA’s version of cyberspace can and will hear you scream.

'Step Right Up and See Boeing’s Amazing Shrinking Tax Rate!' has no comments