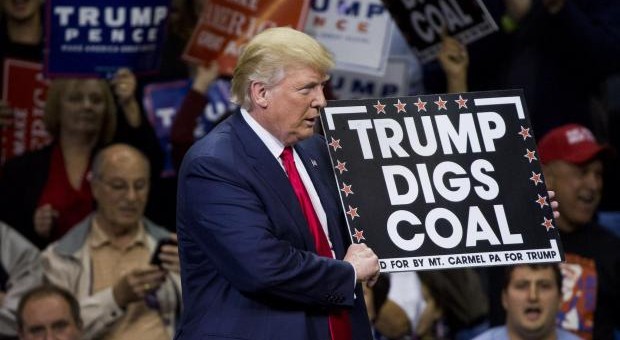 President Trump just yanked the Yanks from a treaty that was intentionally designed to be mostly non-binding because the Senate would never pass a binding treaty on climate. It was, however, a significant global political agreement to move toward goals that would create a working framework built on an unprecedented consensus. Mostly, Paris was an important admission that there is a problem … like an environmental AA meeting.

So, what just happened?

Trump used the Paris Climate Agreement as a buttress. This was a political ploy to shore up support among his loyalists out in the vast swath of Red on that electoral map he recently hung in the White House. This was a move meant to give the President a chance to say he’s fulfilling promises. This was about serving red meat to demoralized Trumpist media outlets. This is about generating a much-needed point of agreement with increasingly uncomfortable conservatives in Congress. This is about selling a new catchphrase: “Pittsburgh before Paris.” And this speech signaled the return of Bannon.

Trump rehashed the grievances of his campaign with all its incessant whining about the ways the world is taking advantage of America. It doesn’t matter that the global system was constructed by the US … in the interest of the US … and with American corporations and financial “leaders” always benefiting from this system. It doesn’t matter that the American people have benefited mightily from this system, too. America is less that 5% of the global population, but it consumes over 26% of the world’s resources. America’s middle class was enriched by America’s domination of the global system it created. But now the world is leveling out a bit and Trump is telling the people they should moan and groan because the benefits of the post-WWII system are waning … because America isn’t getting everything.

Yet the truth is that America’s wealth isn’t being stolen by wily Chinese or shady Indians or conniving Europeans. The people who’ve hoarded the wealth are not only a lot like the people in Trump’s cabinet … some of them are in Trump’s cabinet. Ivanka and Jared are hoarders, too. And so, too, has the oil industry and the defense industry each held a death-lock grip on this system. In fact, the intersection of weapons and crude is the nexus of the system Trump slags-off as some global conspiracy to deny Americans their birthright. And it is a big reason why the Paris Agreement was needed in the first place.

Why? Because Trump is unintentionally creating space for the the rest of the world to finally have a real say in the way the global system works. He’s catalyzing even more leveling-off of an imbalanced system long tilted by America in America’s favor. Trump has been totally played by President Xi. Outmaneuvered by Vladimir Putin. Dismissed by Chancellor Merkel. And now he’s shown the world that America is more fallible than ever. It is moving backwards. It is retreating. And that’s more room for China and Europe and Russia. Maybe that’s not so bad. Maybe it is a good thing that America is the laughingstock that Trump, in a perfect moment of solipsistic irony, said he wanted to forestall. One thing is for sure, the rest of the world shouldn’t wait around for America to clean up its own mess … because that’s something it was loath to do well before Trump body-slammed the body politic and put the future in a headlock. Alas, that’s a wrestling match America is now having with itself … and the rest of the world should just head for the exits.