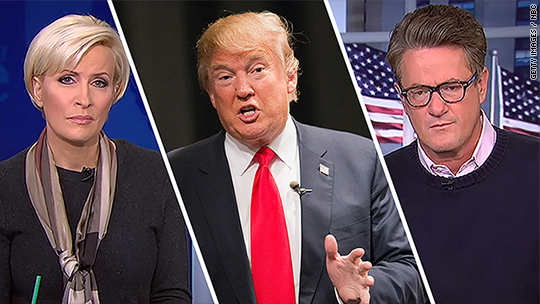 HOT TAKEAWAYS:
1. Trump is an idiot. This attack comes hours after Politico ran a story titled “Trump seizes the advantage in war with media.” And that represents a wider sense in the political zeitgeist over the last 24 hours that the CNN debacle has given him the high ground in his war on the media. Then he does this? It’s stupidity, pure and simple. As we’ve seen over and over and over again, he is all tactics and no strategy. If he was smart, he’d have let the media eat itself and let surrogates do the dirty work while he takes the high road. But he just can’t help himself. He’s little more than a callow teenage boy who cannot stop comparing genitals in a high school locker room. Sad.

2. This culture is sick. it is obsessed with appearance and celebrity. It values winning and the bottom line over all else, as evidenced by our economy and our entertainment (see “reality” shows and Michael Bay movies). The means are always justified by the ends. Always. And this culture is cowardly … internet trolling, drone strikes, road rage … these are all aspects of our dissociation from the consequences of our actions … and the election of Trump is the logical culmination of these two strains — the celebrification of everything and the dissociative disorder at the heart of being “American” — merging into a moaning, groaning Frankenpolitical Monster. The problem is that we’ve actively created this monster ourselves and we are running out of time … because it looks like it is bent on picking us up and tossing us over the edge of our highest parapet just before a gang of global villagers brandishing pitchforks and torches come knocking at the door to demand justice.