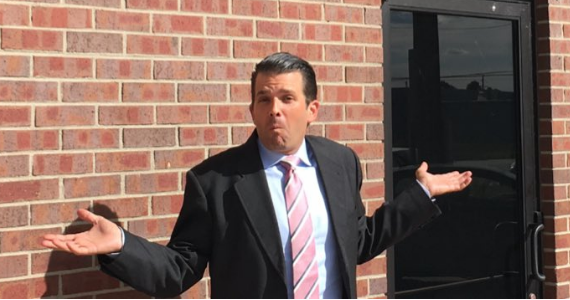 So, now that Junior stupidly dropped the emails on Twitter and the blatherati are now gleefully picking away at the carcass … let’s take a moment to recognize that this is still all about the optics. Yes, “optics” is an unctuous political buzzword, but it fits here because this all looks really terrible … despite the fact that there still isn’t something prosecutable … even after this latest spill.
As Marcy Wheeler and others have pointed out, oppo research is a thing that Hillary’s peeps used and it has been used by campaigns since forever. Let’s face it, campaigns do a lotta dirty stuff. It’s not always kosher, though … like the Reagan campaign basically stealing Carter’s briefing book or his team’s treasonous plot known as the “October Surprise.” The racist appeal of the infamous Willie Horton ad was the end result of oppo research. And I still think the National Guard memo that whacked Dan Rather was a classic Rove set-up to defuse W’s problematic Vietnam Era service when the revival of that story amidst the daily grind of the Iraq War threatened to make him look like a callow chickenhawk. That was leveraged with the oppo-driven Swift Boat attack on Kerry’s military bona fides to create perfect storm that torpedoed Kerry.
These oppo efforts are usually done through third parties and layered with plausible deniability. Apparently, those fail-safes were not built into the Trump campaign. We know that for sure now that Donnie gave us a glimpse in the Trump Team’s appetite for dirty tricks. It looks like collusion is a real thing now. The optics are really bad. And it’s just stupid to post the emails to “get ahead of the story” instead of letting the NY Times post ’em and then attacking the whole story as fake news. That would’ve been an actual strategy that utilized the cultic support of the trumped-up right wing media to massage Trump’s compliant base.
Instead, Donnie Dimmo jumped into the spotlight … which is something you don’t see Jared Kushner doing at all. Why? Because he and his lawyer know that optics matter. And so do Congressional Republicans. Right now they are struggling with these optics … which seem to show: 1. That Team Trump was ready and willing to collude; 2. That the Russian Gov’t was enough of a Trump enthusiast that some oddball music promoter knew about their efforts. Now Mueller’s investigation looks infinitely more valid. And now Trump’s denials about Russia look lamer than ever. And now it looks like Congressional Republicans will have to face a new round of questions that again test their willingness to protect and serve Big Daddy Trump.
And perhaps most importantly … this is happening on the heels of what many GOP’ers saw as a capitulation when Big Daddy met Putin and it’s happening as the White House is lobbying Congress to soften a harsh sanctions bill currently languishing in the House. And that looks way more damning than it might actually be … but “the optics” matters … which is why the White House now holds most of its briefings off-camera.
Liked it? Take a second to support jpsottile on Patreon!

'The Optical Allusions Of Donnie’s Emails' has no comments