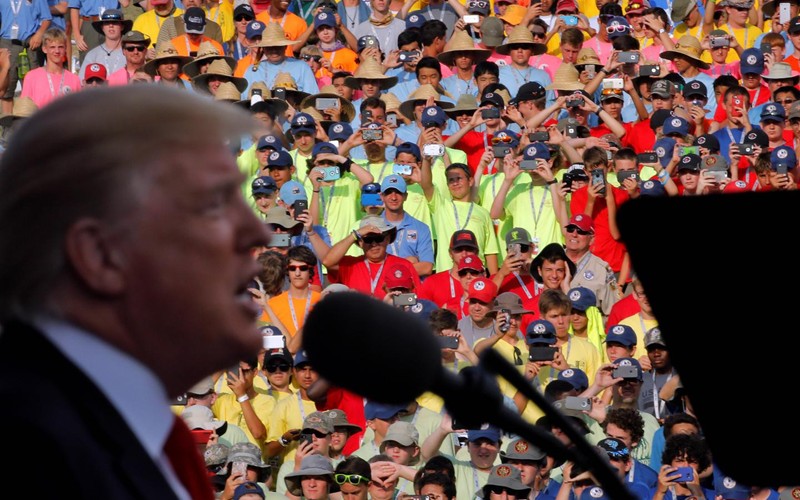 If nothing else, Trump’s presidency is an ongoing exposé of the deeply-seated hypocrisy of Evangelicals, Falwellites and the other cultural conservatives who’ve spent the last thirty years lecturing America on its supposed slide toward Gomorrah. They’ve finally ceded the high-ground with their unabashed embrace of Trump. And they’ve shown that all of their unmitigated moral outrage was a big phony baloney sandwich stuffed with crass greed, garnished with banal self-interest and slathered with a lily-white mayo whipped-up out of their nostalgia for an America that gleefully anointed them as a breed apart from their troubled nation’s other “undesirable” elements.
They’ve been feeding us this crap for years … all under the guise of godliness and cleanliness and the need to save the nation from the corrosive forces of cultural coarseness. But then came Trump … and they bent over faster than you can say “prison rules.” And they’ve never looked back.
But the coup de grâce of this long reveal of their moral turpitude came yesterday when Trump went to one of their most beloved institutions–the Boy Scouts–and regaled the kids with what can only be described as a cross between the kind of bad nightclub act you’d find in an airport hotel bar outside Duluth and a political rally produced by Leni Riefenstahl’s developmentally disabled brother.
It was quite a performance and you don’t have to be Encyclopedia Brown to know that if that same speech was given by anyone on the other team, they’d be running around like witch hunters in 17th Century Massachusetts … ready to put “apologists” in the stockades and burn the speaker at the stake. But, like so much they’ve ignored since he first started courting them, they really don’t give a f*ck. All they care about is their access to power … the teachings of Jesus and, perhaps, their immortal souls be damned.
Alas, the only hell they’ll ever face is the one they seem to want to create for us all here on this Earth.
Liked it? Take a second to support Newsvandal on Patreon!