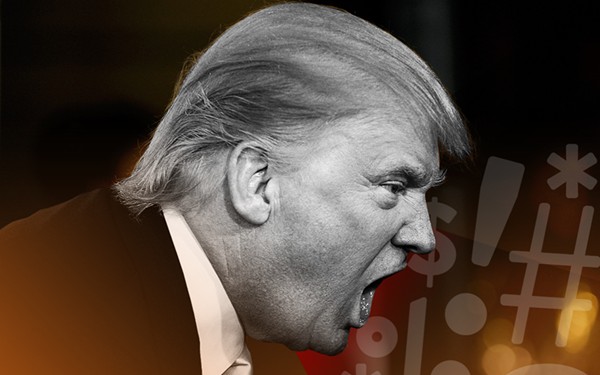 Immanuel Kant was a brilliant 18th Century philosopher. His categorical imperative still stands out as an unparalleled, widely applicable framework for engaging in ethical human relationships. Basically, the idea is that one should never regard a fellow human being as a mere means to an end, but always as an end unto themselves.

Sadly, America has rarely embraced that idea … either at home or abroad. Slavery and post-WWII neo-imperialism are two glaring examples of treating human beings solely as a means to an end. That end amounted to little more than profit and the suffering and death produced by the pursuit of that profit rarely seems to trouble America’s notoriously amnesia-addled historical consciousness.

In Trump, we see the living embodiment of the anti-Kantian life-force … a man who is a walking, talking example of what it means to be diametrically opposed to the categorical imperative. Everyone and everything is just a means and Trump himself is the only end. Frankly, Trump is not just the center of his universe … he is his universe. His is the only star in an otherwise black void. Everyone else is a supporting actor in a grand play he writes on the fly with two tweeting thumbs.

Not coincidentally, the vast majority of those who supported him and who continue to support him did so to achieve their own ends. And, like Trump, they were willing to pursue those ends by any means … even if it meant embracing a patently distasteful human being who is a liar and a conman and a predator and a racialist. But jobs and tax cuts and ultra-nationalism and coal mining and defense spending and racial identification … these ends justified using Trump as a means, no matter the cost.

Now, however, Trump has proven once again that he relishes his bona fides as a villain no one can stop and, thanks to his crass handling of Charlottesville, his role as a “means” has been called into question. At the same time, he loves proving that the anti-Kantian bargain his supporters made with him affords him a singular freedom to be as bad as he wants to be … because of one million jobs and deregulation and executive orders … or whatever else he can pull of out his capacious ass. And that means Trump is empowered by his toxic categorical impairment. But, truth be told, Trump is not really the problem.

Why? Because he merely embodies who we’ve become … a people who routinely accept unsavory means to achieve our own ends … both as individuals and as a people. This is Milton Friedmanism uber alles. This is the essence of reality show celebrity culture. This is financialization and the subprime debt machine that is whirring once again. This is NIMBYism. This is the death race driving style that refuses to let people merge and all of the other ways we see ourselves in constant competition with everyone else. It is a petty war of all against all to achieve what is in the bitter end actually very little. This is Trump as the logical conclusion of America’s categorical impairment and the end of the common good.

And this is the question the GOP is now grappling with: Do the ends of a tax cut for the top brackets actually justify the means of propping up Trump’s Presidency? The same goes for Trump’s GOP rank and file supporters: Does the border wall or expanded bombing of Brown people or gratuitous anti-politically correct attacks on dissimilar Americans or self-aggrandizing attacks on the media … do these ends justify using a reprobate and a liar and a narcissist with little apparent ethical grounding as the means? Just to achieve some ultimately banal, self-serving and transient ends?

If so, then they … and particularly his core Evangelical supporters who should recognize the similarity between the Golden Rule and the categorical imperative … have simply exposed themselves as the crass, ethically vacant and selfish creatures they truly are … and, in so doing, given us all something to ponder as we think about what it will really mean to be an American after Trump finally crawls back under the bridge to spend the rest of his days as America’s preeminent, categorically impaired troll.