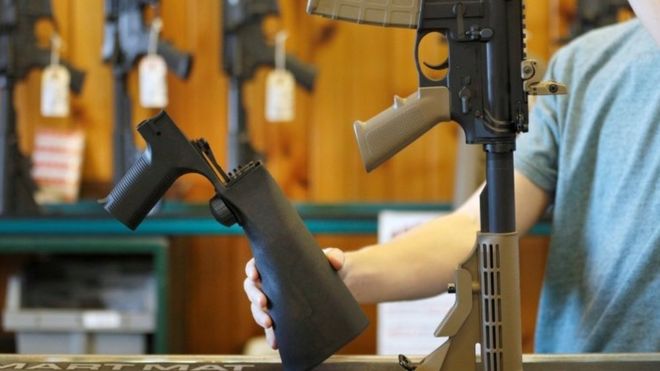 Congress’ forthcoming “bump stock” bill is the perfect political fig-leaf. Cracking-down on a simple device that turns deadly weapons even deadlier is an ideal political solve for lawmakers who desperately need to be seen taking some sort of action. Republicans in particular can embrace this ultimately meaningless move under the guise of actually “doing something” about gun violence in America. And that’s why they are embracing it … it’s gun control without controlling guns.

If passed, they can comfortably go into next year’s elections inoculated against the charge that they are beholden to the NRA without actually transgressing the NRA or most gun-owners. In fact, the NRA just announced that even they are open to restrictions on bump stocks … thus inoculating themselves from a potential backlash, too.

So it’s a two-fer! But it is only a two-fer for the NRA and their “cash and carry” cadre in Congress. It is a big zero when it comes to the daily grind of American gun violence. It’s pure political posturing that will not change anything.

That’s because bump stocks have been flying off the shelves for three days … often selling out in some locations. And bump stocks look like something that could be fashioned by a handy man in a well-stocked shop in a typical suburban garage. Even if someone doesn’t have the skill to make one, they’ll still be out there. Anyone who really wants one … will get one … particularly with millions of bump stocks already sold across America. Given that stark reality, how will a new restriction functionally eliminate those privately-owned bump stocks? And who will be tasked with stopping people from making one or buying one on the black market if they really want to get to the so-called “happy spot” where their already high-powered rifles spit out hundreds of rounds like an open garden hose? How will a new law put that genie back into the bottle?

It’s really just an extension of the conundrum around the entire gun issue. It is estimated that Americans own 310 million guns. That’s nearly a gun per person. America is locked and loaded. Simply put, this nation, which owns nearly half of the world’s civilian-held guns, is a teeming mass of well-armed wannabe actions heroes who believe it is their birthright, and some even believe it’s their God-given right, to bear arms. There is no chance they’ll let go of that Hollywood-primed fantasy or that intoxicating feeling of individual power. And there is no way this country will engage in an Australia-style round-up of guns … at least, not for another two generations. And we ain’t gonna amend the Second Amendment … at least, not for another two to four generations … if ever. Let’s be honest, it’s gonna take a a lot of effort and a long time to stop handing down America’s uniquely potent gun-loving gene.

So, it seems like we are stuck. And that’s because we are stuck. We have a culture that is suspicious of society and a society that is suspicious of each other. And we are a people who are suspicious of our government which, it must be pointed out, is really just made up of people. Government is referred to like it is a being … or a monster … but it’s really just made up of other Americans. Which brings us back around to a growing dysfunction that causes us to fear our neighbors and loathe our fellow Americans. Our distrust of government is intertwined with our distrust of each other. And that’s the real reason we like our guns.

Frankly, this Hobbesian dystopia has been the rule in American history. The one blip was the period from the Great Depression through World War II and, with notable exceptions (Jim Crow + McCarthyism), into the Eisenhower Years. That was a faint glimpse of America as a “whole” people who might be willing to entertain the idea of living in a society. It was catalyzed by widespread economic hardship, total war and fear of Commies raining down nuclear holocaust on mom, apple pie and Chevrolet. They were tribal reactions to existential fears. But there was also a widely-held belief that most Americans were in it together and that government and being a part of society were not inherently bad things. And other Americans were not merely your competition.

Since then, it is has been one long backslide into the bloody, anti-social norm of American history. This has been the American Way since America’s inception. It’s been that way since the Whiskey Rebellion and runaway slave patrols and the bugle-tootin’ cavalry galloping in to wipe out nettlesome American Indians who dared to get in the way of Manifest Destiny. It’s been that way since the Black Wall Street Massacre of 1921. And it returned during the assassinations and chaos of 1968. The only real difference now is the turbo-charged nature of the weapons we wield thanks to the All-American ethos of bigger-faster-cheaper.

Of course we want more firepower with more bullets delivered in less time. That’s not just an integral part of America’s insatiable consumerism  … it’s just common sense when everyone is armed and everyone is a potential enemy in a nation that looks and feels like one giant O.K. Corral. It’s the ultimate self-fulfilling prophecy and it ultimately ends up filling morgues with the collateral damage of our damaged culture.

And all the politically-easy bump stock bans in the world will not fix that core issue. We are going to keep paying this price until there is a real and lasting change in the way we see each other. Until we are willing to be a part of society … we will not be able to give up our gun-based culture.

'Congress Reaches For A Bump Stock Fig Leaf' have 2 comments