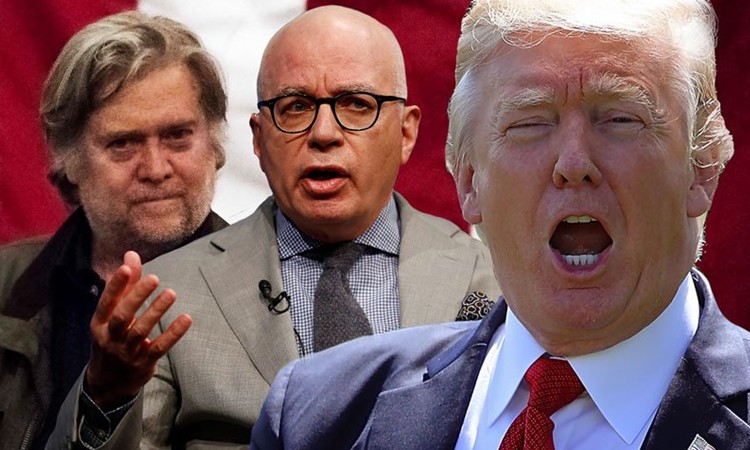 In watching an extended press avail with Trump and a bipartisan group of Senators and Representatives … it occurs to me that Michael Wolff may have done Trump a huge favor by driving a wedge between him and Bannon. Sloppy Steve’s grand plan to remake the Grand Old Party has not been going well (paging Roy Moore) and I’ve long believed it is in direct contradiction to America’s changing demographics. It is also predicated on the fool’s gold of the Trump’s 2016 victory … which was far more about Hillary’s loss than Trump’s win.

Now all the signs are pointing to a major political catastrophe for the GOP in 2018 … even on the issue of the recently-signed tax bill, which is almost as popular as running your pinkie toe into the leg of a coffee table. And Congressional Republicans know it.

But now Bannon has been expelled and McConnell has taken his victory lap. That’s given the GOP room to maneuver. Trump is also now free to dissociate himself from some of those problematic Alt-Rightisms that put the GOP in a corner, put a hard and low ceiling on his support and put the non-Freedom Caucus/Steve King Whack-a-doodle Wing out front as the face of the party.

Bannon’s banishment means McConnell and many Senators and a number of House Repubs who have not yet decided to leave the Congress before an ignominious defeat are now poised to leverage the space between Trump and Bannon into passing image burnishing things like a DACA deal … and the popularity-obsessed Trump is poised to move toward a more “conciliatory” posture before the 2018 election turns into the most epic rebuke of recent political history.

Of course, it is all just politics and opportunism by people who are facing an existential threat to their political lives. And Trump’s White House is facing multiple threats to their unparalleled ability to operate almost unimpeded behind the greatest shiny object of all time. They need Trump to score some wins that break through that ceiling … and if Bannon and Ann Coulter and others disapprove? All the better.

Frankly, that’s because this is the season of political survival and maybe, just maybe, Wolff created the space many of these players desperately needed to triangulate their way through 2018 cycle.

'Did Michael Wolff Do The GOP A Favor?' has no comments