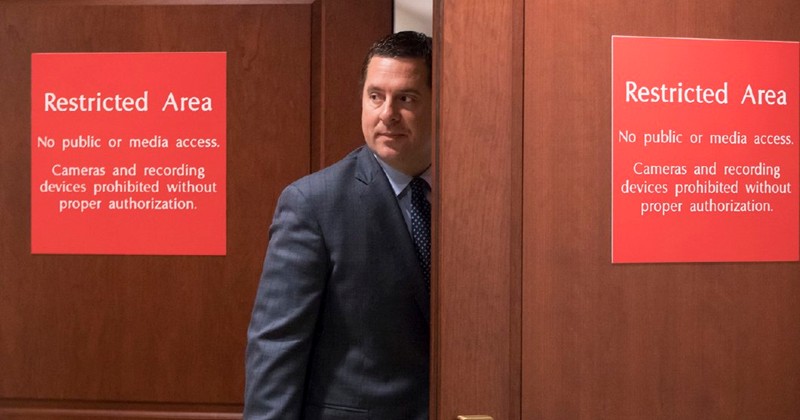 LINK TO THE MEMO: http://apps.washingtonpost.com/g/documents/national/read-the-gop-memo/2746/

White House Counsel Don McGahn writing in his cover letter re: declassification: “To be clear, the Memorandum reflects the judgments of its congressional authors”

Every one of the FBI/DOJ officials that participated in the Carter Page FISA process has been fired or pushed out, except Rod Rosenstein.

Nunes and Co. say that the Steele Dossier “formed an essential” part of the FISA application process. BUT, that can only be confirmed if we see the classified warrant application. Otherwise, we are left to believe Nunes, who has already been caught peddling bogus documents he laundered from the White House by redelivering those “unmasking” documents to the White House the following day. That “scandal” petered out.

IF the Steele Dossier was truly essential, then I can see a case being made that its origin be disclosed. However, what we don’t know is if the parts of the Dossier used were also CORROBORATED by other sources or the official investigation and THAT was why it was used. Again, without the classified FISA docs, we are in the dark.

Steele went to the media, and they don’t like that much … plus that makes him (in their opinion) an unreliable source. They say the FBI agreed, but was remiss in not “terminating him as a source” in September instead of in October. This, by implication, makes the FISA warrant unfounded. Again, we don’t actually know what is in the FISA warrant. It is classified.

In October, Steele talked to Deputy Atty Gen. Bruce Ohr and said he was “desperate” and “passionate” about forestalling Donald Trump’s possible election. Okay … but by then Steele had uncovered a bunch of stuff about Trump’s alleged misdeeds and Putin’s supposed hold over him. So, he didn’t like Trump. And? Your point? I mean, I get it … if this guy just made shit up out of whole cloth and that became the “essential” basis of the FISA warrant … then, yes … we have a problem. If the FISA court is so dysfunctional that it issues a warrant based on a former British Intel officer’s supposed grudge (which has to be placed in context … meaning, the publicly-released Fusion GPS testimony indicated that Steele uncovered stuff over time and his alarm grew by the Fall) … then the FISA court needs to be abolished. Period.  But again, WE DON’T HAVE THE RELEVANT DOCS and, therefore, we are being asked to accept, as Don McGahn said, “the judgments of its congressional authors” … which means Nunes and his staff. Not a great source of credibility, IMHO.

They state that an FBI official said the corroboration process for the Dossier was “in its infancy.” But that could also mean that what was corroborated was already enough to warrant the FISA warrant … and, if the corroboration has since matured, who knows how bad it all looks for Trump? Who knows? We will not know until Special Counsel Robert Mueller issues a report. And IF it is all horseshit … there is nothing to worry about, right? Trump will be exonerated and the Democrats … by wildly overplaying their hand … will be trounced in November. It will be the Clinton Impeachment, Part Deux. So why not let it play out?

Finally, they circle back to Peter Strzok and Lisa Page … the FBI’s texting lovers … and imply that their anti-Trump bias somehow tainted the Page warrant because George Papadopoulos was mentioned in the Page FISA application (which ALSO MEANS there was way more than just the Dossier going into the warrant because Papa-D was under investigation and may have already been cooperating with the FBI which, it stands to reason, would be a much stronger predicate for the FISA warrant that the Steele Dossier).

So, by pointing that out, did Nunes and Co. kinda show that the Dossier WAS NOT really the essential basis for the warrant? The Papadopoulos-triggered investigation began in July of 2016 and the Carter Page warrant reauthorization was sought in October of 2016 … and it stands to reason that Papa-D’s revelations played an essential part in the FISA application. That would be great to know, but, again … WE DON’T HAVE THE DOCS … just these “conclusions.”

It is also funny that the FBI’s texting lovers come up … particularly since the pro-Clinton bias of Strzok is undermined by the criticism he lodged at just about everybody in those texts and the fact that we just learned he participated in drafting the memo re: the reopening of the Clinton Email Server investigation in the final weeks of the campaign … a revelation that halted Hillary’s hopes of election. It is also worth remembering that last week the airwaves were filled with hysteria about a “Secret Society” that turned out to be a throwaway line between the two texters. We haven’t heard anything about it since. It certainly isn’t in this memo.

Nor does this memo point out that, as The Wall Street Journal reported the day before the release, beginning in 2013 the intelligence community identified Carter Page was a person of interest because of his relationships in Russia. That’s three years before the Dossier … yet it is missing from the memo.

Ultimately, this looks more like the memo is about creating a political argument for Trump’s base and for sympathetic independents … and about providing political cover for pro-Trump Representatives in the House and Senate … in advance of Special Counsel Robert Mueller releasing his findings.

The memo’s focus on the Dossier might also reflect Donald Trump’s fixation on its salacious details and his desire to discredit both the Dossier and the investigation with one fell swoop. It is thus far not about reigning-in the FISA court or the surveillance state … both of which have long been championed by … wait for it … Rep. Devin “Dogged Daze After” Nunes. And it might become Trump’s excuse for firing the one FISA warrant-related official who, as noted above, has yet to be jettisoned — Deputy Assistant Attorney General Rod Rosenstein. And he’s the last person standing between Trump and Mueller.

'HOT TAKE: The Nunes Memo, Unpacked' has no comments