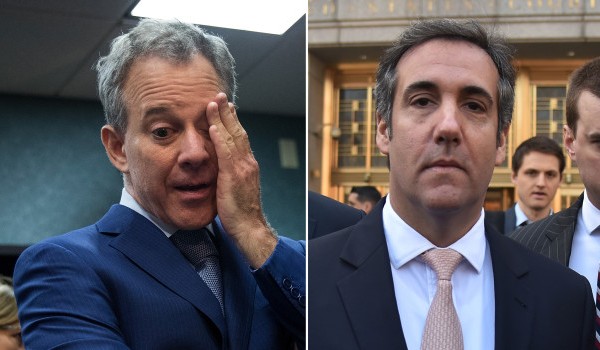 So, I have been wondering about the timing of the Eric Schneiderman scumbaggery story because, of course, he’s a crucial player in seating Trump-related investigations at the state level … a.k.a. putting them out of reach from what I see as a forthcoming pardon-palooza from President Donald Trump.

Well, thanks to a new court filing we’ve now learned this: Lawyer for 2 Women Who Say They Were Schneiderman Victims Talked to Michael Cohen … and it turns out that Cohen, Trump and iconic tabloid reporter Steve Dunleavy were all in on the Schneiderman story for some time.

Since it broke, I have thought that the bombshell Ronan Farrow and Jane Mayer dropped in The New Yorker was, in fact, auspiciously-timed because it will allow the NY Attorney General’s office to recover long before Robert Mueller issues a report or he gets the ax or before Trump goes on his pardon-palooza.

It also ELIMINATES the ability of Trump to use the Schneiderman story as leverage against Schneiderman or to use it to discredit the state-level investigation at a crucial point if and when the investigation has to be essentially handed-off by a departing Mueller or pushed forward by the NY AG’s office in the wake of a barrage of pre-emptive pardons.

Now Schneiderman is gone and the office is currently leaderless, but the rank and file prosecutors and legal researchers who’ve done all the legwork on dozens of investigations like Trump SoHo remain in place and, in a sense, a potential liability has been removed should they need to be activated.

And let’s face it … if Steve Dunleavy knew about it … other journos knew about it … and it is likely that Farrow & Mayer were not the only ones actively working the story. Interestingly enough, the story coming out now through them eliminates the possibility of a politically-timed hit at some point in the near future. And maybe that’s why they did Trump no favors by forcing a reprobate to abandon his compromised position before it could be used to great political effect later.

'Was Michael Cohen Sitting on the Eric Schneiderman Story?' has no comments