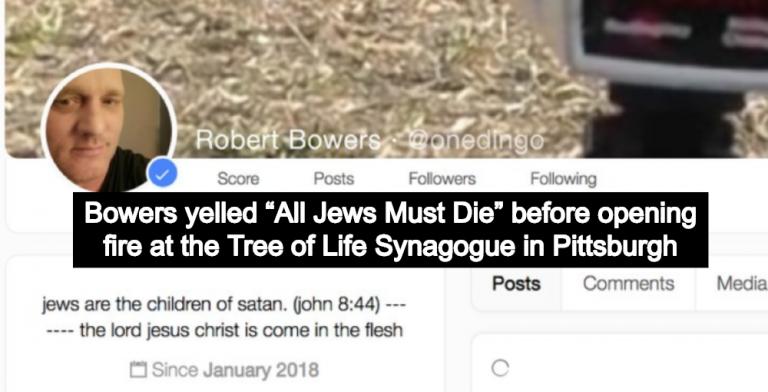 I have been following and studying White Supremacy and Neo-Nazis since the late 80s … and, at the time, I researched and wrote about WAR (White Aryan Resistance), the Christian Identity Movement (at Hayden Lake in Idaho) and associated groups (the killing of Alan Berg) … it was my original focus as an undergrad and it led to my focus on the intellectual history of fascist ideology.

I believe that I can tell you exactly what the Pittsburgh Synagogue Shooter’s state of mind was rooted in … it is the same world-view that inspired the Alt-Right and White Nationalists to chant “Jews Will Not Replace Us” at Charlottesville and it Venn Diagrams with Trumpism in many ways, although there is a split inside that world re: Trump and whether he is actually compromised by Jews and, therefore, not willing to go far enough to protect the White Race against its “planned” subjugation or extinction.

But, simply put, these people believe that the Jews are the mortal, almost supernaturally-imbued enemies of the “White Race” (I use capitalization to reflect their monomaniacal emphasis on race as something almost theological in nature).

They believe that following the failure of the Nazis in World War Two … there is now an “international Jewish conspiracy” to use Brown People to dilute White Nations through mass migration and that this plot will finally compromise the White Race to the point that the Jews will finally be able to destroy the White Race and supplant them from their rightful spot atop the global pecking order … which they think is a hierarchy of species with each race being inherently different. They think Jews are particularly “devious” and therefore they are their go-to bête noire to blame for anything and everything they dislike. They think Jews also like to “weaponize” Blacks and Browns to achieve their grand schemes. Some believe God has sent Jews to test the will of the White Race. Others believe they are the simply the agents of Satan. Still others think it is an pseudo-Darwinian (Spencerian) struggle. They have all turned Jews into the malevolent force behind their laundry list of grievances.

So, it is easy to see how the guy who killed Jews in a synagogue did so because he blamed them, and likely George Soros in particular, for things like the migrant caravan that Trump and his media megaphoners have turned into a daily drumbeat in an effort to weaponize nativism and fear of Brown people into a midterm election victory. In fact, this guy was obsessed with a Jewish refugee organization that assists displaced people … and it reflects an idea that has been prevalent for decades and first emerged into a mainstream politics when Pat Buchanan challenged GHW Bush in the ’92 GOP primaries. They believe that “Anglo-European White culture” is being driven into extinction … and this is an idea that has really taken hold in Europe, BTW … where Steve Bannon and the Mercers have focused their efforts since Trump was elected.

It has all metastasized to the point where David Duke retweets Trump and Richard Spencer led a “Heil Trump” chant after he was elected and Trump talked about “very fine people on both sides” of Charlottesville. But a cadre of them are NOT Trumpists … like this guy, they believe #MAGA is “kike infested.” Still, the use of migrants and criminal illegals and MS-13 and Middle Easterners as a barely-coded election appeal undeniably rooted in racism has absolutely created the matrix within which these guys have been emboldened and it is spreading ideas that once remained contained in a small subculture of racist ingrates into a wider political movement that is, essentially, a reboot of the Southern Strategy.

This is not going away anytime soon. Trump used coded versions of these ideas to get elected and is using them to keep control of Congress … much like the Southern Strategy used coded versions of traditional American racism to elect Republicans for decades … and we will see the harvest of this bitter fruit for years to come. – JP Sottile

'The Pittsburgh Synagogue Shooting In Context' has no comments