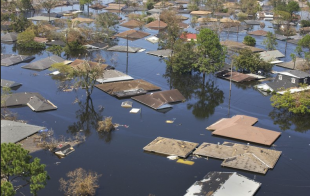 Segregation ended in the 1960s…NOT!

Katrina washed away years and years well-constructed illusions that, since those heady days of the Civil Rights Movement, racism has become a quaint, provincial part of our collective past.

Despite the significant progress we’ve made…let’s face it…if those people stranded in New Orleans were in a wealthy, white Republican city they wouldn’t spend day after day without food, water or evacuation. We did more, and did it quicker, for the tsunami victims. But, then again, that was a huge PR effort to buff our tarnished world image. Particularly since many of those victims were Muslim. Condi Rice said so…really…she blatantly said it. But I digress….

The WoB put this issue before my eyes years ago. I moved here from the Bay Area back in 1999 and lived in a Beltway Burb. I saw it then, the subtle segregation of race and class. But my forays into the WoB were startling. The difference between NW and SE was the difference between Paris and Beirut. The million-dollar homes, private schools and overflowing supermarkets and specialty shops of NW juxtaposed by the dilapidated homes, row houses, disintegrating schools and proliferate fast-food joints of SE…with nary a supermarket to be found.

Then I faced the roads…looking like they’d been bombed continuously over the last decade, ridden with holes and punctuated by bumps…the infamously bad educational system…the lack of a vote in congress. I became hardened to the ways of the Whore, and the glittering contradiction of this modern Babylon. I fled…back to the racial acceptance, lifestyle acceptance and general good feelings and camaraderie of the Bay Area. I don’t like racism. I’ve felt it a couple times, much less overtly and intensely, but it’s still a bitter pill.

And now I’m back, and I don’t have the subtleties of suburbia to lessen the blow. I live near Rock Creek Park, in a nice, “English Basement” apartment in a maintained, high-value home. I only need to walk a few blocks, though…over to Georgia Ave…and there is the WoB’s unkept secret. It’s not SE, but it’s not good either. Sure, it’s gentrifying…and I guess that’s good. But will those interlopers send their kids to the local public school? And who gets pushed out so that they can barge in? And once pushed out, where do they go? SE?

This, the capital of Freedom, Equality and Justice offers only platitudes to DC’s Black population. This city is built on platitudes. And the poor stay poor, disenfranchised and…Black.

So, when I reflect on the last week in New Orleans I see that the veneer is gone, stripped away by a monumental tide of unholy water. Underneath that veneer of progress and equality and justice, under the shiny finish we’ve put on a long, storied history of wealth and egalitarianism–we see that poverty is still there, racism is still there. This is the reality. Katrina sent us many messages. I doubt we’re ready to receive this one.

'Race to the Top' has no comments