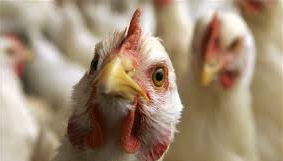 Okay everybody, let’s get scared!

And, by the way, the patent for Tami-flu is held by Gilead Sciences. Defense Secretary Donald Rumsfeld was chairman of Gilead before he became Chief Operating Officer of War Profits Inc., a.k.a. the Pentagon. He still has millions of dollars in stock holdings in Gilead. Gilead is going to make bank off the bird flu scare and the billions in tax dollars our President proposed spending yesterday.

So, how many times have you heard this connection mentioned over the last few weeks? Exactly.

But the bird flu story has been non-stop for a month. And that with only a couple hundred people dying because they cavorted with infected birds in the close-quarters conditions of Southeast Asia–where tomorrow’s dinner is often found walking around your front door today. Yes, many birds are being culled. Yes, it’s popping up around the world. No, it hasn’t been transmitted from human to human. Yes, it has to mutate to be dangerous. Any questions?

Now, let’s stop and think about this for a minute. Remember when the flu was just a really bad cold? When people stayed in bed, drank gallons of orange juice, popped aspirin and then got better? Before flu shots…shots loaded with mercury-laden Thimerosol. Thimerosol is made by Eli Lilly, and Ken Lay is on the board of that company. Past Lilly luminaries include Poppy Bush, Dan Quayle, Mitchell Daniels. Thimerosol will be used to preserve all the vaccines that we build up to deal with bird flu, if we come up with a vaccine for bird flu. There’s a lot of money is sickness.

Or the fear of sickness.

And it’s that fear factor this Administration has used over and over again to stoke profits for one corporate contributor after another. Fear of a collapsing energy market, stoked by outages in California–bullshit outages created by Enron!–led to huge corporate gifts from American taxpayers. Duct tape and plastic sheeting for Home Depot. Hundred of billions of dollars for the Military-Industrial Complex out of the fears from 9-11, of false WMD claims for Iraq, of false 9-11 claims about Saddam. Billions in profits from fears in the oil market. Take a minute and think about that one—profits rise to record levels every quarter since going into Iraq—at that time, home of the second largest oil reserves in the world. What?

And then there’s Social Security, and bogus claims of SUV safety and on and on.

Fears about the flu are the latest scam. So, go out and stock up on Tami-flu. Donnie-boy needs a golden parachute once he’s done irradiating Iraq and our troops, torturing people in former Soviet-style gulags in Eastern Europe, creating profit center after profit center for Dickie-boy’s Halliburton. His time at Gilead will have been a mutually beneficial relationship should we forgo reality and keep marching to the drum-beat of fear…a fear my cohorts in the media love of play on…and on, and on.

No matter what happens over the next few years, everyone in this Administration will come out golden. Some may need pardons, but all will need Swiss bank accounts. And we all may take a healthy dose of mercury in a flu vaccine should the miracle of evolution mutate bird flu into a real threat. Or by the miracle of “Intelligent Design” for our Evangelical Republican friends.

However, the golden parachute crowd doesn’t need that mutation…they’ve already caused the primary mutation behind all of this. They’ve inspired us as a nation to evolve into scared lab rats, stuck in a maze, searching for some cheese and directed along the path they set out for us. Our grand experiment in democracy has evolved into mere experimentation.