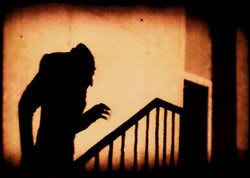 We can’t stop them. Sure, they retreat to corporate coffins when exposed to a little sunlight, but they rise again once darkness falls. They are the Covert Vampires, the undead bloodsuckers who, it seems, find ways to keep feeding on the lifeblood of our increasingly tenuous democracy. The names are strangely familiar, even if their exploits are scandalously unknown to the masses: Negroponte, Reich, Poindexter, Abrams.
The one thing they all seem to share? Allegiance to, or association with, the great Covert Vampire of our time: George Herbert Walker Bush who, a wealth of circumstantial evidence indicates, began biting and transforming mere humans in the lead up to the Bay of Pigs.

His first? A guy named Felix Rodriguez who was a Bay of Pigster and was, strangely enough, still on the CIA payroll during Iran-Contra. Felix was doing “something” in Central America. Thanks to a paper-thin investigation of that scandal, we still don’t know.

Robert Gates is the latest vampire to crawl out of his coffin–a plumb presidency of at the University of Texas. This time he will stalk the halls of the Pentagon. Gates has a history as a man of action….covert action…which is well documented. Journalist Robert Parry was the Bram Stoker of the Covert Vampire story, shedding enough light on their dark world to open up a crypt-ful of secrets we now know as Iran-Contra. It was enough light to keep Gates from being confirmed the first time he was proposed for DCI, Director of Central Intelligence.

But Gates finally made it through, thanks to strong support from Poppy Bush. Now the reign of Poppy seems like the salad days of American foreign policy, so Gates’ fangs look small compared to those we’ve seen in Rumsfeld’s growling mouth.

In fact, we’ve been a fed a steady diet of Poppy’s people as a rational alternative to the Neo-conned administration of his son. Gates is a creature who has had his hand in intelligence jury-rigging, proposed covert bombing in Central America and stuck closely to uber-Covert Vampire Bill Casey during Casey’s tenure at the CIA–when Casey was sucking dry our Constitutional lifeblood as he managed Iran-Contra.

It’s Gates’ knowledge of covert ops in Iran that makes him the logical choice for Secretary of Defense. Iran’s throat is target one, and Gates knows the ropes–the “way in” that Poppy and Casey latched onto during the 1980 Presidential Campaign. He knows how to bite the arteries that pumped money and arms, delayed release of the hostages, led to the Iran-Iraq war and, ultimately became an elaborate money-weapons-drugs triangle that keep the Contras illegally supplied.

Now that the Defense Intelligence Agency (DIA) has, under the guidance of Rummy, eclipsed the recalcitrants at the CIA, Gates is the perfect man for the job. He is breezing through simply because he’s not Rummy. Because he said we are not winning in Iraq. Wow! What an amazing insight. But he remains part of the larger team–a team of Covert Vampires and their Political Familiars who’ve been running things for decades.

When the son entered the White House, there was little talk of those Covert Vampires so loyal to Poppy, even though they quietly took up key positions. Sure, we knew that Cheney and Rumsfeld were Poppy’s bloodsuckers. But post-9/11, the talk was all about the Neo-Cons. Pre-emptive strikes, spreading democracy and changing the map of the Middle East.

Many Neo-cons were also there during Reagan-Bush and the covert antics that typified that presidency. Leeden, Wolfowitz, Perle, and more. Some were actively involved in Iran-Contra. Wolfowitz began jury-rigging intel way back in 1976, under Poppy’s CIA directorship.

Again, Poppy is a common denominator.

But these Neo-cons we’ve grown to despise are not really in the same class as the Covert Vampires. They are more like Zealous Zombies…operatives who are trotted out into the public sphere to spout their monotone intellectualizations about democracy, freedom and American power.

Like Covert Vampires, they also seem to keep on coming…like Night of the Living Dead extras…stalking and feeding…never dying…a march of undead intellectuals blathering on about rationales, transformations and power projections.

Many of those Neo-cons have been thwarted…at least publicly. The Zealous Zombies are, it would seem, in retreat. But they are the bad cops and the Covert Vampires look like good cops. Doesn’t Gates look like a good cop?

But let me unmix my metaphors.

Because the key ingredient of the vampire metaphor is the Political Familiar. In vampire lore, the bloodsucker has a minion–a non-vampiric human who “takes care of things” for the master. When there is too much sunshine the familiar takes the lead in covering up the location of the vampire, securing transport and picking out future victims. He acquires coffins and helps the vampire travel.

And we’ve got some Political Familiars on our hands. As if this metaphor is coalescing like a Hollywood script, James Baker and Lee Hamilton, the single greatest Political Familiar of all-time, have emerged to “save the day” in Iraq. Timed perfectly with the arrival of Gates, they are going to “shed light” on the darkness of our destruction of Iraq and give us “a way forward.”

But really, they are there to provide misdirection. To provide cover in the midst of all that light glaringly exposing the disintegration of Iraq. It’s what they do.

When Iran-Contra broke–and, by the way, Veep GHW Bush was the point man on all CIA/Covert Ops matters in the Reagan White House–Familiar Hamilton began a slow, methodical derailing of the investigation. He threw a cover of darkness on much of the scandal and hid from view the worst aspects of Iran-Contra: the CIA-Contra cocaine pipeline into the Los Angeles and the deep politics of the October Surprise and the “how and when” the covert arms pipeline into Iran was first opened.

Hamilton did it for Bush the Younger when he sat on the 9-11 commission. When the Vampires need darkness as they cower in the light, Lee Hamilton is there to provide plausible deniability and to give the vampires a safe, dark place to hide.

And so it is with Gates. A Covert Vampire taking the reigns of a newly invigorated covert intelligence operation in the Pentagon at the same time the Baker Commission provides misdirection…a misdirection that has entranced our Senate with the idea that things are changing, that policy is changing.

You see, since the toppling of Mossadeq in Iran back in 1953 and on through United Fruit in Guatemala (the Bush family had a large share of stock in United Fruit) and then to the Bay of Pigs, the assassination of Idealistic Triad the 60s onto Watergate and Iran-Contra and BCCI and Iraqgate…well, you get the picture. It’s been a non-stop series of covert ops. And it’s been the same damn vampires all along. Although men like Hamilton pose as Van Helsing, we find they are, in fact, familiars.

When people try to drive stakes through their hearts they are ruined, isolated, removed…and some die.

How else could these guys keep coming back, time and again, after they’ve appeared to have died…to have exited the stage of history. The Democrats certainly haven’t driven stakes into their hearts…even when they were helplessly exposed to the light of day.

No, they keep on escaping, retreating to well-paid coffins and then rising again…and feeding.
Liked it? Take a second to support Newsvandal on Patreon!

'Robert Gates and the Covert Vampires' has no comments